Hurricane Irene is eyeballing the east coast, readied to ruin the weekend plans of those already shaken up by this week's earthquake. How bad will round two of the August East Coast natural disaster onslaught be? Moderate. And here's why... 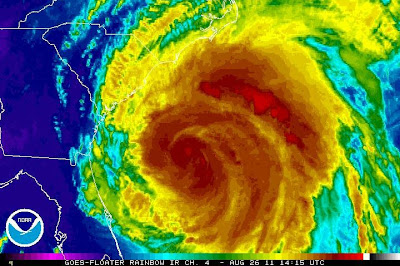 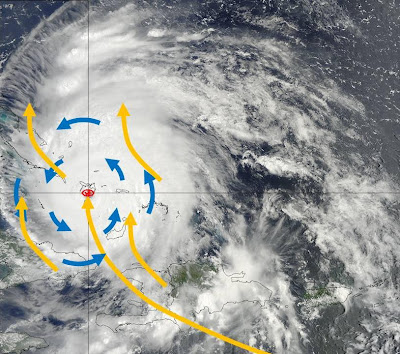 [Areas of maximum wind speed in a hurricane are often felt in the northeast quadrant of the storm where the counter-clockwise rotating winds combine with the relative wind speed of the storm. Illustration by quantum.]

Irene is projected to ride the coastline on its journey up the East Coast, which means its windier eastern side will be mostly off-shore. South of New York, it looks like the East Coast will get a lot of rain and a fair amount of wind, but the majority of the strongest winds will be limited to coastal areas and offshore.Those further inland ought expect a stormy weekend but not much more.

The full girth of the hurricane should make landfall in the New York area in the afternoon on Sunday, but by that time, it will likely have weakened and the wind speed will, again, not be as much of a problem. For those in New England, the biggest worry will be lots of rain and the potential for lawn chairs to be blown away.

Storm Surge
Storm surge is another big concern when it comes to hurricanes. Air pressure presses down against ocean water at an average sea-level pressure of 1013 millibars. In the eye of a hurricane, the pressure is far lower than average and doesn't push down as hard on the water. This causes the water to rise higher than water outside the hurricane. This moving hill of water carried in the center of the hurricane is known as storm surge. 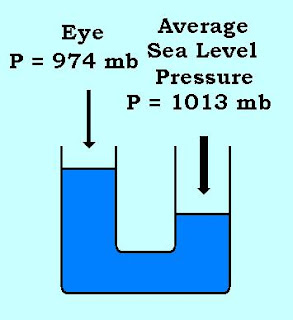 [If you've ever taken a physics course, it's likely you've seen a graphic similar to this in your beginner's physics text book. Low pressure at the center of a hurricane causes water to rise. Illustration by Echo Romeo.]

When the hurricane makes landfall, this hill of water is carried onshore, causing flooding. If the landfall timing coincides with high tide, the flooding can be even worse. Around five o'clock on Saturday, around the time when Irene should be making landfall in eastern North Carolina, it will be two hours shy of high tide, so flooding there could be a problem. The same story is true for the New York area, where Irene will again make landfall in the evening on Sunday, near high tide.

Things to Worry About
One thing is certain: The East Coast is going to have some wet and windy weather this weekend, with a possibility for power outages and flooding. So, it's a good idea to be prepared.

Hurricanes are a lot like blizzards in terms of preparations - something East Coasters should already be used to. Power outages should be expected, affecting homes, grocery stores, gas stations and banks. Accordingly, it's a good idea to have plenty of drinking water, some non-perishables like peanut butter and crackers, and a couple of flashlights with working batteries. Make sure to make a run to the gas station and the ATM today as gas and cash are two things that are sometimes difficult to find after a storm. Also, remember to charge up cell phones - especially for those without landlines.

Lastly, hurricanes always have the potential to spawn tornadoes, though usually weak ones. So no matter how nice it looks outside, keep an eye on the local weather station and stay indoors just to be safe!
Posted by Unknown