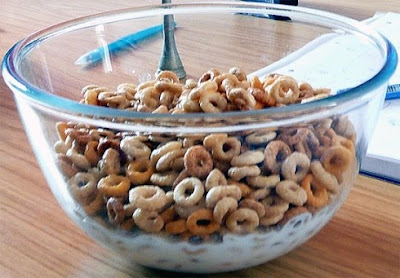 Have you ever noticed how the last bits of cereal in the bowl always seem to cling to one another, making it easy to spoon up the remaining stragglers? Physicists have -- and they've given it a name: the "Cheerios effect".

But this effect isn't exclusive to breakfast cereals. It also reveals itself in the way particles move in the air, pollen floats on the surface of water and galaxies cluster throughout the universe.

"If you put Cheerios in a bowl, they aggregate," said Arshad Kudrolli of Clark University in Worcester, Mass, who wrote a paper on the effect for the journal Physical Review Letters. "Or if you look at foam floating on a beer, you get clumps. That's because of surface tension."

Molecules in a fluid have a mutual attraction for each other and the effect creates surface tension -- a naturally resistant force that repels back against anything that pushes on the surface. It's surface tension that allows some insects, such as water striders, to walk across the water's surface -- and also fuels party tricks like floating paperclips or thumb tacks.

Kudrolli and colleague Michael Berhanu, also a physicist at Clark University, wanted to explore this effect in order to better understand similar phenomena in the natural world. So instead of going to the grocery store, they placed floating glass spheres in a funnel-shaped container of water. By altering the amount of water in the container, they could cause the glass spheres to either concentrate or disperse, simulating the various stages of the Cheerios effect.

"Physicists are interested in the Cheerios effect for a range of reasons," said postdoctoral researcher Dominic Vella from the University of Cambridge in the U.K., who was not involved in this research. "There are many instances of such systems in nature, so the insights that we gain from this model laboratory system may aid our qualitative understanding of more complicated systems."

Floating objects change the shape of a liquid's surface. If the molecules in an object are attracted to water, they are considered hydrophilic, or water-loving. Water gathers around the sides of the floating object and there will be a small depression beneath it called a meniscus. If the molecules in an object do not bond well with water, physicists say they are hydrophobic, or water-resistant, and the effect will create a small protruding bump underneath them -- a meniscus curved in the opposite direction.

In the case of your breakfast cereal, the Cheerios can be considered milk-philic because the O's create a small depression in the milk's surface, forcing them to fall in towards each other. Liquids can form similar features along the edges of a container and make the milk in your cereal bowl curve very slightly upward against the wall. Because Cheerios float, they will move up the curved surface of the milk and cause the O's to clump against the edges of the bowl as well.

"The bowl is also milk-philic so the meniscus goes up near it," said Vella. "This means that there is both an attraction between individual Cheerios and between a single Cheerio and the wall of the bowl."

Kusrolli and Berhanu found that when you throw just a handful of Cheerios into a bowl of milk they aggregate into hexagonal groups, but when you have many particles dispersed over a larger area -- such as pollen floating across a lake -- the particles gather into condensed areas with large gaps of empty space between the groups. While the driving force is different, Berhanu said this same effect can also be seen in the cosmos. Large clusters of galaxies and stars cling closely to each other while leaving vast amounts of empty space between them.

It isn't new in the sense that no one ever noticed it before. The new part is that the are developing a theory to describe the effect, and testing the theory with an experiment. Once they have a good, theoretical description, it becomes a very powerful tool for understanding other things, predicting how things will change over time, or even controlling the way systems evolve.

After all, people knew about gravity before Newton, but he developed a pretty good theory that explained how it worked. That led to all sorts of things, including our ability to land on the moon and to put satellites in orbit (to name just two of the countless possible examples).

is it new science ?, an construction teacher told me about these effects when we talked about concrete mixtures about, well i think 15 years ago, allready pointing to other fields of physics where this effect was known. But i dont know if he had a name for it like here, i think it was named differently. beside concrete mixtures those formulas where used in painting industry as well in fact for paint and pigments the formulas where a bit more complex.