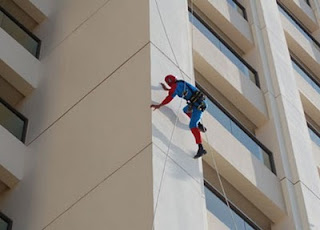 Spider-Man fever never seems to die. Just Google-news search "spider" and you'll see what I mean. Apparently there's a Spider-Man Broadway musical set to be produced (and Alan Cummings has bailed out - but we should have seen that coming). I live in New York City and I can honestly say that I may never go see a Broadway musical and I will not feel bad about it. Still, I recognize the iconic/ridiculous popularity that something must reach before it is turned into a Broadway musical (see: Toxic Avenger)(did I just invalidate my own point?).

But that's not all. Now it seems you can have Spider Man clean your windows for you. A full grown man or woman who is already performing a very dangerous job will now dress up in a costume fit for a child and perform that same job for the entertainment of the many onlookers who have previously stopped to watch window washers but have felt that it lacks zest (what? exactly.). The company featuring these costumed clean-saders (get it?!!) said that they want to add fun to whatever they do. Although if we think this through, the person who is doing the job (the window washer) is probably not enjoying dangling from a sky scraper and wearing a mask. (Am I crabby today, or does anyone else feel bad for the window washers?)

Lets talk some physics. I had wanted to continue up my post about rope with a discussion about strong materials. The wonderful lecture by James Kakalios at the APS March Meeting taught me that spider silk is one of the strongest naturally occurring materials in the world. In researching this post I'm just overwhelmed with all the awesome little things I'm finding about spiders and their amazing materials.

To illustrate the strengths of spider silk, Kakalios showed a scene from Spider Man 2, in which Spidey stops a speeding train using his webs. Assuming the speed and weight of the train, and how far it had to slow down, and taking a stab at the thickness and number of web strands, Kakalios shows Spidey would, in fact, be able to stop that speeding train, while even steel cables would not. Real spider silk in a quarter inch thick strand can support 6,000 pounds. (See his answer to that and other questions here.)

So why can't we buy spider silk rope in our local hardware store? Or make a clothing from it (which would be lighter and stretchier than Kevlar, although Kevlar is slightly stronger*)? Well, apparently reproducing spider silk is not so easy. This article from Live Science in 2004 calls reproducing spider silk on a larger scale "the holy grail of materials science." A bit of a journalistic overstatement I think, but obviously intended to convey great importance. Because really, the Holy Grail of anything is the Holy Grail. There's really no substitute for eternal life, is there? I am full of distractions today. 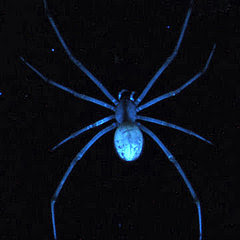 But really, this whole post is a distraction. There's some physics in here about spider silk and its strength and flexibility, but mostly it's just marveling at spider amazingness. There is seriously so much cool stuff to learn about spiders. Did you know their blood flouresces? (See pic to the right) Did you know the pain from a spider bite may be similar to the pain you experience when you eat hot food? Then there's the super strong nano-structures that exist in their fangs. If these things were the size of tanks they would rule the world. Luckily, it doesn't seem like those super structured claws or the super strong spider silk can transition to the macroscopic world very easily.

Scientists have even taken spiders to space. When building a web, spiders can sense their own weight, which provides a guideline for how thick the silk should be. NASA scientists immediately challenged the spiders by chanting, "Oh yeah? Betcha can't do that in zero gravity!" Living up to their end of the challenge, NASA scientists took common garden spiders (Araneus diadematus) spiders into space, where they were still able to build webs, and over time got better at building them in zero gravity. Their results showed that the web threads were finer in space than on the ground. So the weight sensing mechanism works pretty well.

As for manufactured reproductions of spider silk, there seem to be few if no updates on work that was done five or six years ago. Well, at least not breaking news stories about it. The subject of spiders and there silk, however, remains heavily researched by groups like the Oxford Silk Group, who were featured on some British TV shows to talk about this stuff.

All this spidey awesomeness - is this why people still have Spider-Man fever, years after the third and terrible movie came out? I enjoy a good comic book, but these real life spiders are the ones who have me tangled up in their web.

OK, that was kind of horrible. Let me try that again:

The comics are great, but it's the real life spiders that will bite you.

That one didn't make sense. Here we go:

Comic books will capture our imaginations, but real life spiders will hit us in the face with their steel cable webs of awesomeness any day!

That's the one! Call the Nobel Committee! Happy Weekend!!

Then mission accomplished! Thank you!