We haven't seen dark matter yet. We haven't, right? Sitting in a plenary talk at the APS April meeting today I started to have my doubts. 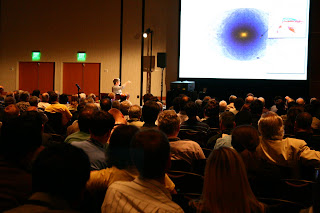 [Photo courtesy of Echo Romeo]
In the discussion, Hooper pointed out the various experiments which have seen hints of dark matter. Of these, only one is claiming to have definitively seen dark matter--the DAMA collaboration, which looks for seasonal variance in a signal representing the amount of dark matter hitting the Earth. Nobody doubts they have seen a signal, there is just debate about whether it is due to dark matter or some other, so far unexplained, effect.

However, there are other experiments which have seen hints of something. That includes CoGeNT, an underground experiment, and the Fermi Gamma-ray Space Telescope. There's even an intriguing hint of how the Tevatron might shed light on the dark matter (see our next post). But where it gets really interesting is that the properties of dark matter in each of these cases is the same. They all seem to have a mass of about 5-10 GeV (a proton is about 1 GeV). Also, their cross sections--the likelihood that they will collide with something--is about the same in each case. The next piece of evidence that would help is if CoGeNT sees a seasonal variation in its results--that data is expected to be released soon.

There is also some suspicions of dark matter observations from the PAMELA satellite but that would not be consistent with these other measurements and has a few potential explanations that don't need dark matter. Then there are experiments like XENON100 which claim to rule out the dark matter explanation for DAMA and CoGeNT.

Just what would discovery of dark matter look like? Well, with all these different experiments looking for it, you'd expect to start to see hints of its existence in them potentially before any could claim discovery. In other words, it would look just like this.

We can't say that we've seen dark matter but might we be able to see say we are seeing the first hints of it? Time will tell and Hooper says that within 5-10 years we will know definitively whether dark matter exists (at least in the form of cold dark matter particles) and have found it if it does.
Posted by Unknown

WPLondon: The existence of dark matter doesn't really have anything to do with other universes, but it might shed light on the fundamental forces of nature. Dark matter interacts with other particles through the gravitational force, but it ignores electromagnetism (aka light). This means it could be an entirely new fundamental particle not made of protons, electrons and neutrons, such as a WIMP.
Dark matter solves the "missing mass problem" first postulated in 1933 by Fritz Zwicky, which is that galaxies contain much more mass than is visible (ie particles that interact with light). Zwicky, and subsequent experiments, found that there is 400 times more missing mass in galaxies than predicted by prior theory. The idea of "dark matter" was hypothesized to solve this problem, and here we are today! I'd also recommend looking up 'dark energy' if you're interested in this stuff.

Quite right! Thanks for catching the error. It's fixed now.

Once have proved dark matter then what?

Could this indicate the existence of another reality or universe? How do the forces interact? And how can they be stabilized?

I can see the future of travel being here already.