First the Higgs, Next Supersymmetry? UPDATE: Hooper and Buckley's paper has been posted to the ArXiv and can be found here.

Though the discovery of the Higgs boson is less than a week old, scientists are already looking for the next important discovery to come out of Genevaâs Large Hadron Collider. Â Since Wednesday, thereâs been a flurry of papers posted to the ArXiv digging deep into the released data, looking for hints of new physics. Two researchers at Fermilab may have found just such a clue hidden in the behavior of the Higgs boson. Â Â
Dan Hooper and Matthew Buckley at Fermilab, write in an upcoming paper that theyâve found evidence of the supersymmetric partner of the top quark in the decays of the Higgs boson. Scientists have been looking for evidence of Supersymmetry in the LHCâs collisions since it started up, but have been stymied so far. Â

Supersymmetry is an all-encompassing theory about how the universe works which would expand on the current Standard Model of physics, which ties together how matter and energy interact. The Higgs boson was the last particle predicted by the Standard Model still waiting to be discovered.
However there are aspects about the universe that the Standard Model canât explain, like why gravity is so much weaker than all of the other forces, what dark matter is, or even why the Higgs isnât much more massive than it is. To explain these, physicists have been looking for new physics for years, and one theory thatâs gained a lot of traction is Supersymmetry.
Supersymmetry would explain these anomalies through zoo of massive particles yet to be discovered, each one a shadowy mirror of another particle already identified. Itâs an elegant theory one that lies right on the cutting edge of theoretical physics. Supersymmetric particles thus far have only been postulated, never observed.
Signs are just starting to peek through that researchers may finally be getting closer to finding solid experimental evidence to support the theory.
Hooper and Buckleyâs paper, which is scheduled to be posted on the ArXiv on Sunday and titled âAre There Hints of Light Stops in Recent Higgs Search Results?â looked at anomalies in the way the Higgs boson decays. Once a Higgs particle is created, it lasts for only a tiny fraction of a second before breaking into several other fundamental particles which is what the detectors actually see.
The two researchers saw that the Higgs was breaking apart into two photons more often than the Standard Model predicted and into W-bosons, Z-bosons and taus less often. Something has to be causing this deviation from the expected norm, and the researchers found that the best way to explain these results is that the presence of the supersymmetric partners of the top quark, known as âstopsâ which is short for âsupersymmetric top quarks.â
Â âThe most obvious candidates are partners of the top partner, such as stops within the context of supersymmetry,â the paper reads. âWe find that the presence of such a particle can easily modify the Standard Model Higgs widths in such a way to come within approximately one standard deviation of the observed values.â 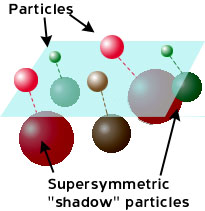 The data observed by the Fermilab researchers is consistent with one version known as low energy Supersymmetry, where all of the particles are relatively low mass. No actual stops were directly observed, but the researchers say that if one existed, it would yield the results seen. They predicted it probably would weigh in at in at around 300 GeV; about 300 times the mass of a proton, or about 2.4 times the mass of a Higgs boson.
âThese guys definitely know what theyâre doing, and what theyâre looking at is a very plausible thing that could be going on,â said Sean Carroll, a physicist at Caltech. âI wouldnât say that this is strong evidence or weak evidence, but it is compatible.â
Data that is compatible with the theory is a significant step. There are many different possible theoretical forms that that Supersymmetry could take. As results from the running of the LHC have been trickling in, different versions have been refuted.
âSupersymmetry had a chance of being discovered by now but it hasnât,â Carroll added. âItâs being a little more coy than we would have liked.â
The results are promising, but still preliminary and far from conclusive. Hooper and Buckley acknowledge in their paper that there could easily be unknown systematic effects in the detectors or in the accelerator that could produce these anomalies. As the LHC continues to run early into next year, and collects more data, a more complete picture should emerge. The LHC is scheduled to shut down for upgrades starting in early 2013 before coming back online in 2014, at which point, Carroll says scientists will have the best chance to really put Supersymmetry to the test.
Posted by Unknown

The tev brane can't be ruled out so easily. Nothing screams five dimensions like energy bleeding into every point in space-time.