Why is it so hard to find flight 447's black boxes?

The French government announced today that more bodies and wreckage from the Air France flight 447 crash off the coast of Brazil had been found almost two years after the crash. The critical pieces of the puzzle, the plane's flight data recorders - or black boxes - are still missing, however. But why are they so hard to find? 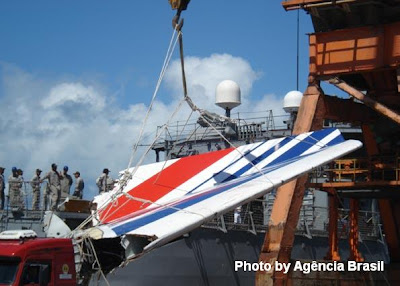 [Flight 447's vertical stabilizer (tail fin), recovered in 2009.]
The wreckage from flight 447, which crashed in the Atlantic Ocean off the coast of Brazil in June 2009, is scattered over mountainous ocean floor at depths from 12,500 - 13,000 feet, or around 2.5 miles. Though that doesn't sound very deep, especially when you consider that modern airliners often cruise at three times that height, it's far too deep for scuba divers or naval submarines to explore.

For every 33 feet you descend under water, the atmospheric pressure pushing down on you increases by 100 percent. At the surface, every person and object has 14.7 pounds per square inch of air pressure pressing down on him or her. That pressure feels normal to us, but once it is increased or decreased, it starts to cause problems.

Boyle's law tells us that as the pressure doubles, the volume decreases by half (assuming there's no change in temperature). If, for example, we pulled a party balloon under water, at 33 feet - where the atmospheric pressure is doubled - the balloon would be half as big as it was at the surface. Drag it down another 33 feet and it would shrink in half again. Human's lungs are a lot like a balloon. At around 1

00 feet, humans reach the limit of how much pressure their lungs can stand.

Imagine what it is like at 12,500 feet, where the wreckage is scattered. Even modern naval submarines can't stand the pressure at that depth. They call it a day at around 1,000 feet where the pressure is over 30 times the surface pressure. Beyond that, they could be crushed like an empty soda can.

At the wreck site, the pressure is almost 400 times the pressure at the surface. To survey the sea floor at 12,500 feet below the surface, a special mini submarine called a submersible is needed. Submersibles have a limited range and can only stay under water for hours at a time so they usually work in conjunction with another vessel - a ship or a larger submarine.

A yellow submersible called Nautile, who previously surveyed the Titanic wreckage, helped originally locate flight 447 wreckage in 2009. (The Titanic wreckage is also at a depth of about 12,500 feet.) A similar sub, called Alvin, was also used to explore the Titanic wreckage when the ship was discovered. Though it seems impossible, the tiny sub is protected by a titanium pressure hull just 2 inches thick. Both subs carry 3 explorers.

The sub that found the latest wreckage was an unmanned sub called a REMUS 6000. The REMUS 6000, with no human occupants, can travel a little faster and a little longer than Nautile or Alvin, but even it can explore for only 22 hours at a time, limited by battery life.

A deep, dark environment and the special tools needed to explore it make searching for anything at 2.5 miles under the sea a difficult task. There's hope, after finding an engine and landing gear, that the black boxes may yet be found, and help solve the mystery of what really happened to flight 447. Even if they are found, it's anyone's guess whether the boxes will have survived two years of crushing pressure in a corrosive seawater environment.
Posted by Unknown

@Anonymous -- I'm not sure where you're getting your 33 percent from. We're talking about Boyle's law which says that, for a constant temperature, as the pressure is doubled the volume will decrease by half. The relationship is linear.

For more, Wikipedia has a fairly good description of the law: http://en.wikipedia.org/wiki/Boyle%27s_law

@Rhett -- Thanks for the extra info about scuba diving!

@Michael -- I sure hope they are found and readable. It would be great to know what really happened on that flight.

@Aaron -- Thanks. I should have been more clear when talking about what human lungs can take. I was talking about the average person holding their breath and diving under water, not a swimmer trained to go to deep depths using special equipment.

Scuba, as you said, is also a different story since the breathing is more controlled. Just having to go through all the effort should tell us something about how much the pressure does change as we go under water!

It is amazing how deep some people have been able to dive! Here's a website about diving records, both scuba and free diving (non-scuba): http://www.scubarecords.com/

Here's some information on the physiology of human diving from the U.S. Navy: http://www.onr.navy.mil/focus/blowballast/people/habitats3.htm

No limits freediving does not use scuba. There is also a difference between attempting to breathe from a snorkel when there is a large pressure differential & being able to withstand the pressure on a breath hold. I'm just suggesting that a physics blog should be more accurate on the facts.

Having personally been inside shipwrecks nearly 200ft below the surface while breathing helium mixtures & over a 1/4 mile into underwater caves, I'm well aware of human physiology & the gas laws. I have even experienced Boyle first hand in my elbow...

The lungs are not limited to 100ft...just ask Tanya Streeter.

Will the recorders by readable if found?

The CVR of South African Airlines Flight 295 was recovered in 1989 at a depth of 16,100 feet from the Indian Ocean. That recorder used magnetic tape, and was still readable (though damaged) 14 months after the accident. The FDR was never located.

The recorders onboard AF447 are at approximately 12,500 feet and are solid-state devices. In comparison, if they manage to locate them, the chance that material will be able to be recovered from them is quite high.

One big problem. With scuba diving, the diver uses a regulator. The regulator delivers air at the same pressure as the water around the diver. This makes it possible to breath easily at depths below 100 feet.

Take a snorkel for comparison. A snorkel delivers air at atmospheric pressure. This means that it is difficult for lungs even a couple of feet underwater to expand and breath.

Human lungs can withstand far more than 100ft of pressure. The record for no limits free diving is 214m!