So what exactly was in all those old fallout shelters?Â 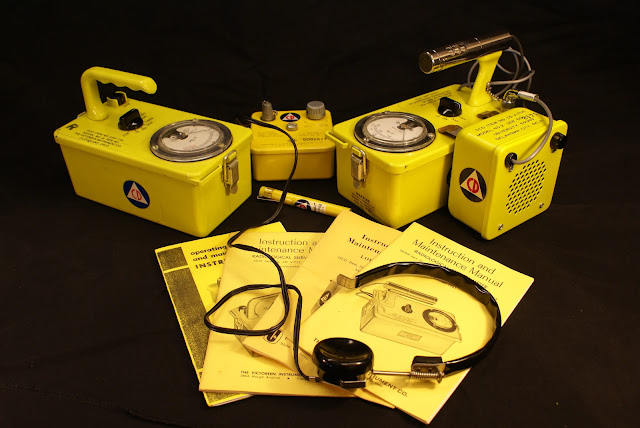 During the 1950s and 1960s, the Cold War was at its height and the fear of atomic warfare with the Soviet Union wasÂ terrifyingly palpable. In response,Â the United States Office of Civil Defense stocked thousands of fallout shelters in the basements of public schools, city halls, apartment buildings and factories with supplies to protect citizens from the radioactive aftermath of a nuclear attack that never came. But what did those rows and rows of storage boxes that everybody hoped they would never need actually contain? In addition to lots of survival crackers, barrels of drinking water and medical supplies, these big public fallout shelters were stocked equipmentÂ to monitor the surrounding radiation. However, starting in the late 1970s and early '80s, the federal government stopped supporting the shelter program. Storage budgets shrank, equipment started becoming obsolete andÂ millions of pieces of equipment went up for sale as government surplus. Here's a tour of the most common radiation equipment that might have been stored in the basement of a nearby public school in the event of an atomic attack.Â

One of the things that make atomic bombs so dangerous, and these fallout shelters seemingly necessary, is its lingering radioactivity. When a material is radioactive, it emits energetic subatomic particles. There's a couple of different kinds of potentially dangerous radiation, referred to as ionizing radiation,Â and some are more damaging to organisms than others. Alpha radiation is the least dangerous, and can be mostly blocked by skin, a piece of paper or even a few inches of air. The particles emitted are made up of two protons and two neutrons. The second kind is beta radiation, is a bit more penetrating and therefore dangerous. Beta particles are really just electrons, and can usually be blocked by a thin layer of aluminum sheeting. Gamma rays can be really harmful to living tissue. They can also pass through several inches of lead, which is why all of these fallout shelters were underground. There's also neutron radiation, which depending on how fast the neutrons are flying, could be as dangerous as gamma radiation. An atomic bomb would leave behind tons of radioactive dust and debris, so citizens were told to stay underground and monitor radiation levels until it was safe to come out. Â 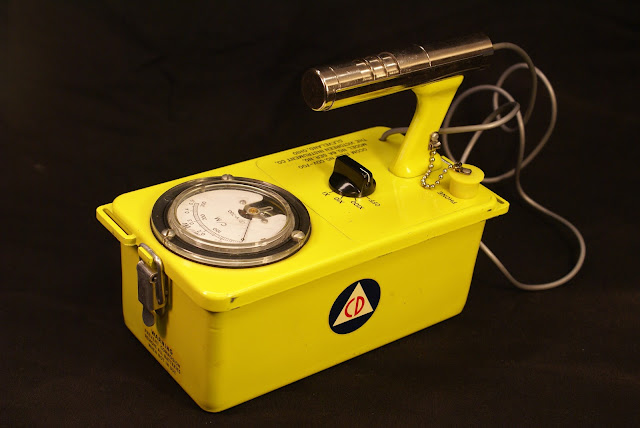 This is probably what most people think of when they hear "Geiger Counter." It's the CD V-700, and it's designed to detect low levels of beta and gamma radiation. In order to take a reading, the user detaches the silver probe up top, twists it open and passes it near whatever they think might be radioactive. If the object is "hot" the needle on the dial will spike up, giving a reading. It works because inside the probe is the Geiger-Mueller tube can detect every time a particle shoots through it. There's a gas inside of the tube along with the positive and negative ends of a circuit. When a gamma ray flies through, it knocks the electrons off of the atoms of the gas, leaving behind a path of charged atoms in its wake. This lets the electrons jump from the positive end of circuit to the negative end, briefly completing the circuit which pushes up the needle. Potentially dangerous radiation is called "ionizing radiation"because when this ionization happens in your body by knocking away electrons, it can damage your cells and the molecules that make up your DNA.Â 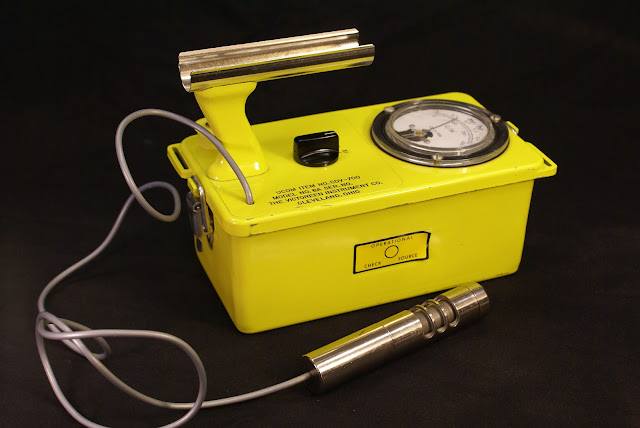 In order to make sure that the Geiger counter works, the manufacturer included a small radioactive source on one side of the device to test and calibrate it. Inside the circle in the middle of the rectangular sticker is a small piece of depleted uranium (other models and manufacturers sometimes used radium). The amount of radiation emitted by the sample is well below what's considered unsafe, and it is the best way to see the needle click up. Here, the probe's window is open, letting in the beta radiation that would normally be blocked by the nickel-plated brass door, and the dial is showing that it's reading the emitted radiation.Â 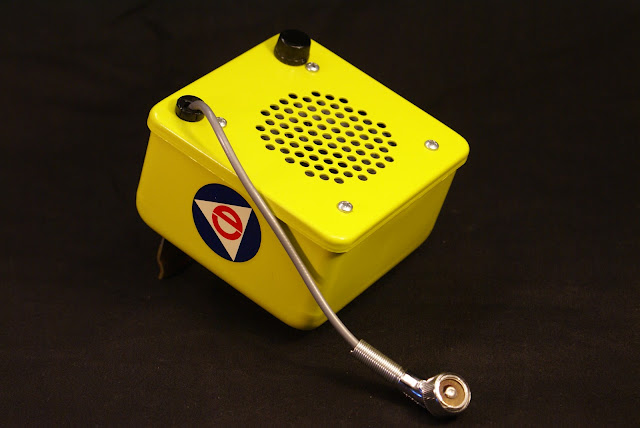 This speaker is the CD V-705, when hooked up to the CD V-700, it clicks every time a particle of radiation completes a circuit in the Geiger-Mueller tube. The faster the clicks, the more radiation it's picking up. 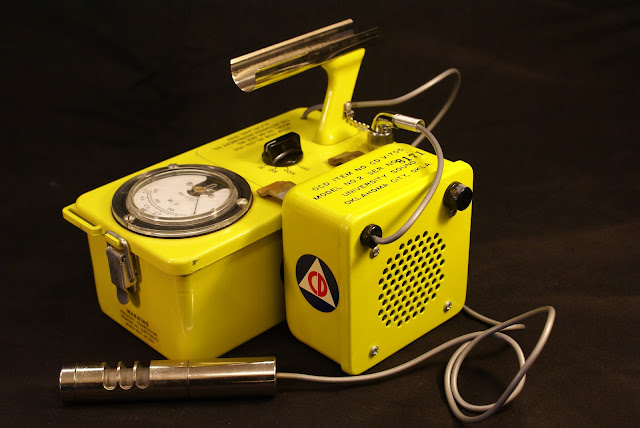 Different manufacturers started making versions of the CD V-700 for the government in 1954, and by 1974 when they finally stopped distributing them, there were more than 450,000 of the devices. This one is from about 1961. All together, only about 10,000 of the speakers were produced and few were actually distributed to the underground shelters. There's a headphone that hooks up to the audio jack which is much more common. 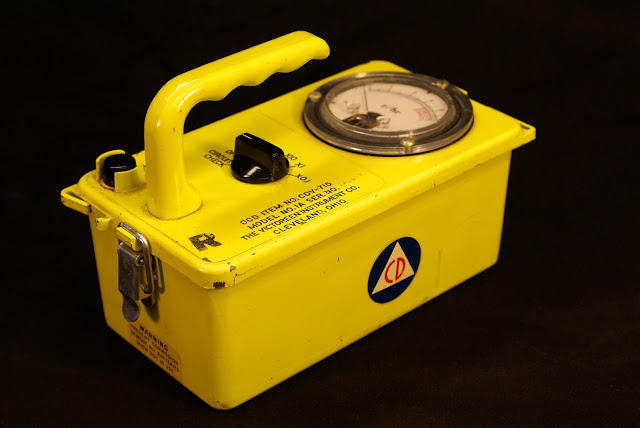 While the CD V-700 picks up low levels of radiation very well, if a nuclear disaster were to happen, it would quickly get overloaded. For that horrible circumstance, the government procured more than 560,000 of these CD V-715s. Inside is a thick disk-shaped detector about the size of a coaster that works essentially the same way as a Geiger-Mueller tube. All the radiation equipment reads doses in Roentgens, a now archaic unitÂ that measures how much net energy is transferred by the radioactive particles.Â The CD V-715's lowest setting reads in intervals of .1 Roentgen per hour, while the CD V-700 is in .1 miliRoentgen per hour, 1000 times more sensitive. To put it in perspective, estimates are that at sea level, a person is exposed to about 200-400 miliRoentgens in a whole year. The CD V-700's most sensitive setting can just pick up background radiation, while if the CD V-715's lowest setting starts picking up a signal, something very bad has happened.Â 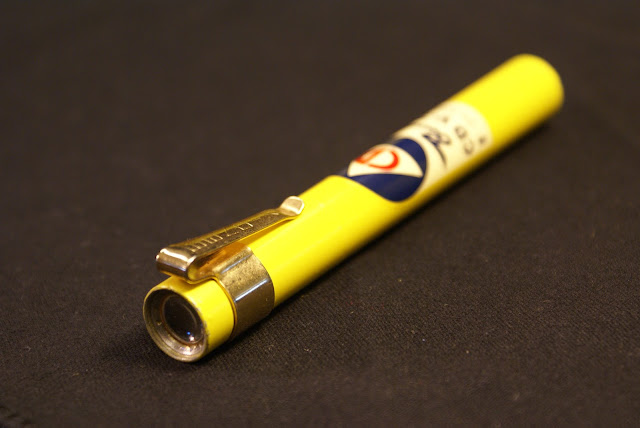 Knowing the cumulative amount of radiation each person was exposed to is also important, which is what the pen-shaped CD V-742 dosimeter is for. A person would clip it in their front pocket so it would pick up same radiation they were exposed to. The dosimeter's small detector works much the same way the other detectors do. A small bit of charge is stored on one side of a chamber which dissapates through the ionized paths left behind by passing gamma rays. As the charge is depleted, it moves a thin needle along a tiny indicator strip. The wearer can read the net amount radiation picked up by the device by looking through the eyepiece at one end. 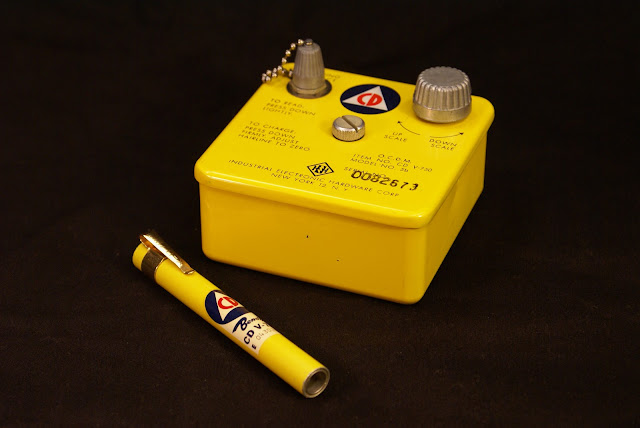 The blocky CD V-750 is the recharging station that also resets each indicator back to zero so theÂ dosimeters could be used again and again.Â There were a couple of different dosimeters produced, but CD V-742 is by far the most common with more than 3 million manufactured.Â 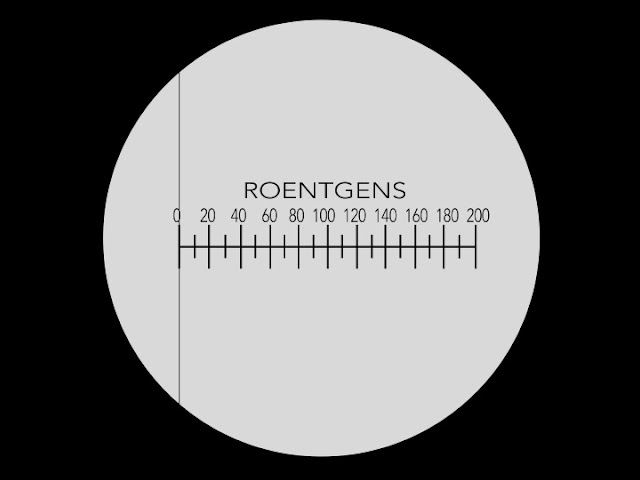 Looking through the eyepiece reveals how much radiation the wearer has been exposed to. The needle moves farther over to the right the more it's been irradiated.Â Like the CD V-715, it's designed for extremely high radiation environments, while other models are more sensitive and have lower ranges. I took mine on an airplane twice (there's more radiation in the upper atmosphere because of there's less atmosphere blockingÂ cosmic rays) and twice through the airport's X-ray scanners, but the needle didn't budge.
How much qualifies as "safe" is a bit of a tricky question. According to old government estimates, a person could be exposed to as much as 100 Roentgens in one hour without developing radiation sickness. However, the reality is a lot more complicated, as some tissues naturally absorb more or are more sensitive to radiation. Long term doses are different because the biggest concern is that the radiation damages DNA, causing cancer. Over time, as people started to understand more about its potential effects,Â the amount of radiation considered "safe" dropped from roughly 25,000 Roentgens per year during World War II, to about 5,000 per year today. That being said, there's a lot of randomness and unpredictability in how it can affect one's DNA. It's possible that in some people very little radiation, even regular background, can trip the right biological switch and trigger cancer, while others who absorb much greater doses suffer no lasting effects.Â
Posted by Unknown

Crazy! It was such a different world back then (and interesting to learn how Geiger counters work!). Though I guess today we have our own survivalists building shelters, convinced of an impending apocalypse, just not necessarily a nuclear one at the hands of the Soviet Union. Maybe things aren't so different...