[Timelapse video of the Dec. 21, 2010 lunar eclipse*]
Early this morning, something happened that hasn't happened in over 300 years - a total lunar eclipse occurred on the same day as the winter solstice, making Dec. 20-21 one of the longest and most unique nights of a lifetime.

Because the Earth's axis is titled, any given area on Earth's surface receives a different amount of sunlight each day. Looking at the diagram below of the Earth's yearlong orbit around the Sun, the Earth at the far right represents its position on the winter solstice. 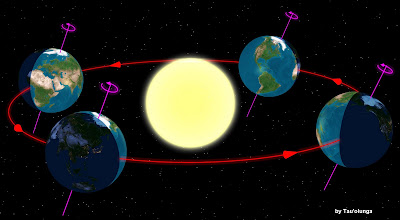 Since the Northern Hemisphere is 'leaning' away from the Sun during the winter, it experiences shorter days and longer nights. Thanks to the axial tilt, northern points on the Earth spend more time in shadow during winter months. The winter solstice marks the day with the shortest amount of daylight and the longest night - the 24-hour period where the Northern Hemisphere spends the greatest amount of time in shadow.

In the same way that the Earth orbits the Sun, the Moon orbits the Earth. Sometimes, the three heavenly bodies align in such a way that the Earth is directly in between the Sun and the Moon. When that happens, there is a lunar eclipse: The Earth blocks the Sun from illuminating the Moon. What was a bright, silvery Moon can turn an ashy gray or a bright orange. It can even seem to disappear altogether.

It's rare for these two events - the winter solstice and a full lunar eclipse - to happen on the same day, but it does happen. It did this morning. The last time this occurred was in 1638. It won't happen again until 2094.

*Above is a timelapse video of this morning's lunar eclipse taken near the Washington D.C. area. The video spans a period of almost three hours, from just before 1:00 a.m. to around 3:30 a.m. It starts at the beginning of the visible lunar eclipse and goes through the first few moments after the total eclipse. It's my first foray into timelapse photography, so the results aren't perfect, but the video still got a 'wow' reaction once it was finished. (Though the moon's movement was predictable, controlling my tripod's movement wasn't nearly so.)

A few high clouds passed in front of the Moon several times which accounts for the sometimes hazy glow around the Moon. The images were taken every 20 seconds using a Canon 20D and a 300mm zoom lens. Variations in lunar surface brightness during the eclipse are mostly due to my manually throttling the ISO, f-stop and shutter speed settings.

Earth's axis inclination.. which is correct? The picture mentioned above in this article or the picture in the below link?

I work as an editor at Hachette-Antoine, the major (lebanese) publishing house in the Mideast. I would like to know if you have an HD version of the picture at the page: http://physicsbuzz.physicscentral.com/2010/12/december-21-lunar-eclipse-video.html. If it were the case, could we acquire one and use it in a french school book to be released in march 2012? What would be the cost of the HD picture?

Thank you for the comments above! To answer the question in the last comment:

The reason you rarely see stars is because a full Moon is so bright. In order to get a properly exposed image of the Moon, the camera's shutter speed must actually be quite fast despite the fact that it is nighttime. It's too fast to record the relatively dim starlight. If the shutter speed were slow enough to capture starlight, all you would see for the Moon is a super-bright white blob.

If you watch the video to the end, however, you will definitely see stars. By the end of the eclipse, the camera's shutter speed was far slower since the Moon was much dimmer. In fact, in the last few photos, there are countless stars.

For more about shutter speeds: http://en.wikipedia.org/wiki/Shutter_speed

How is that all these Lunar Eclipse videos do not show any stars or anything else? They show the moon in a pitch-black background. Some videos have the orange color some do not, some even have music, but none have any stars! ???

We watched this from a balmy Christchurch, New Zealand, from 9.00pm - 10.30pm, a little cloudy to start with, but a great sight. Funny watching your vid as the shadow disappeared from the bottom upwards, I guess thats a Hemisphere thing!