These are just about the creepiest cute things (or maybe cutest creepy things) I can ever remember seeing at the APS March meeting. Even better, they are called phantom mice. 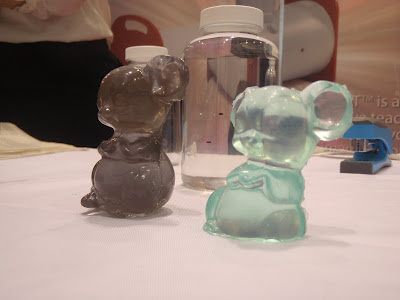 Although I'm sure they'd be loads of fun to play with, and would scare the daylights out of Mathelete if they happened to turn up in her desk or fish tank unexpectedly, they're actually part of an educational system for teaching the physics of medical imaging to med school students. 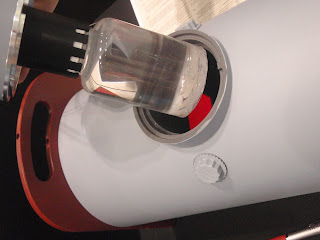 The little transparent mice are made of (I kid you not) Martha Stuart approved silicone. They go inside a canister that is part of a scanner that works just like the sort of CT scanner you could find in a hospital, except without the dangerous X-rays.
Instead, this scanner uses red light to help future docs learn the general principles of computed tomography. They call it the DeskCat, which is why the folks at Modus Medical decided to make their little test subjects in the shape of mice
The red light in the DeskCat basically projects a shadow of the phantom mouse on a CCD sensor like the one in a digital camera. By taking lots of images from different angles, you can use a computer to build up a 3-d image.Â 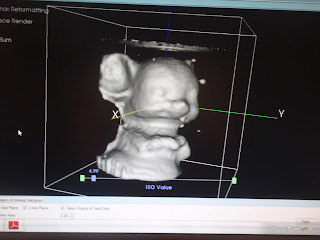 If the light penetrates into the subject, as would happen with an x-ray CT machine scanning a person or red light passing through a silicone mouse, you can make very detailed 3-d images of the inside as well as the outside. 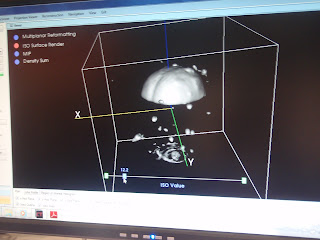 Things used to test and calibrate CT scanners are called phantoms, and these two phantom mice are specially made to demonstrate the DeskCat. Some of the material inside the mice has slightly different optical properties, which interacts differently with the light than other portions. In this case, the other type of material is in the shape of a brain. You can't see it with your naked eye, but it shows up clearly when the mouse is in the DeskCat. 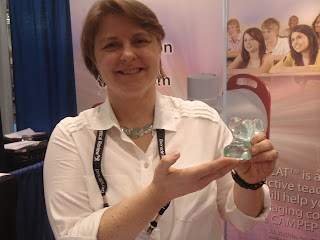 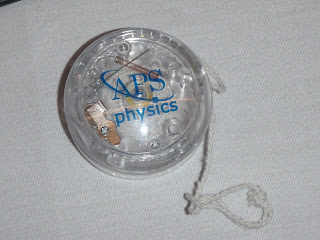 Â Jennifer Dietrich is a medical biophysicist with Modus who demonstrated the scanner for me in the exhibition hall at the Boston Convention Center. She generally images the the mouse, but she says you can scan anything that is transparent and small enough to fit into the sample jar. Unfortunately, my official APS yo-yo was too big. I'm going to try to get back later today with a pack of gummy bears.
In the meantime, here's a video of Jennifer running her machine to give me a look inside the phantom mouse.
Posted by Unknown

Bjarne, what a great and mildly disturbing idea! I'm for it.

What a great educational tool! Love the mice!

How about hooking the output of the CAT scanner up to a 3D printer...you can make more mice, and simulate genetic mutations when the copies don't look quite like their parent :^)