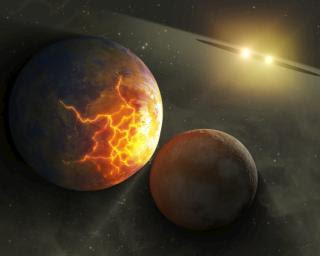 In today's podcast, PhysicsBuzz talks to Marc Kuchner from NASA Goddard about planets orbiting around binary stars. Kuchner and his colleagues recently reported their findings from the Spitzer Space Telescope, which showed that planets around binary stars can have a rough life. They discovered a ring of diffuse dust and believe it may be all that's left of an unfortunate planet that was too close to its dying star.

"These kinds of systems paint a picture of the late stages in the lives of planetary systems," Kuchner said in a NASA press release last month. "And it's a future that's messy and violent."

Click the audio link below to hear the podcast.
planets
Posted by Unknown