TheÂ derelictÂ Westinghouse Atom Smasher,Â one of the oldest (and biggest) artifacts from the dawn of the Nuclear Age, awaits its fate atop a hill outside Pittsburgh.Â 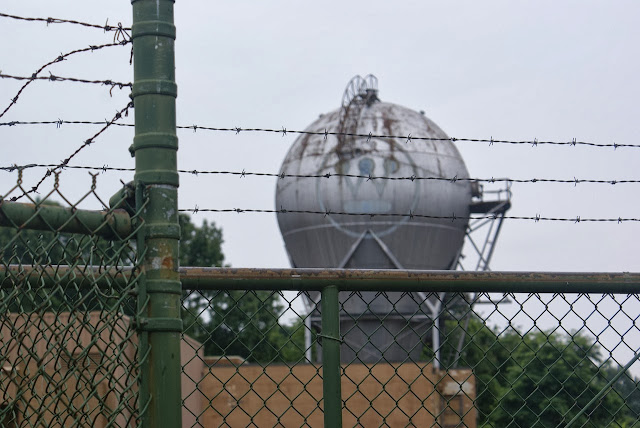 The worldâs first industrial particle accelerator sits rusting away in the Pittsburgh suburb of Forest Hills, its future unclear. It was cutting edge technology when it was built in 1937, but when the company retired it in 1958, it was a relic of an obsolete technology. Six months ago, a D.C. real estate developer with a penchant for history bought the site and has been doing what he can to preserve the giant silver teardrop. If all goes according to plan, heâll convert the old atom smasher into an education center while turning the rest of the property into rental units. 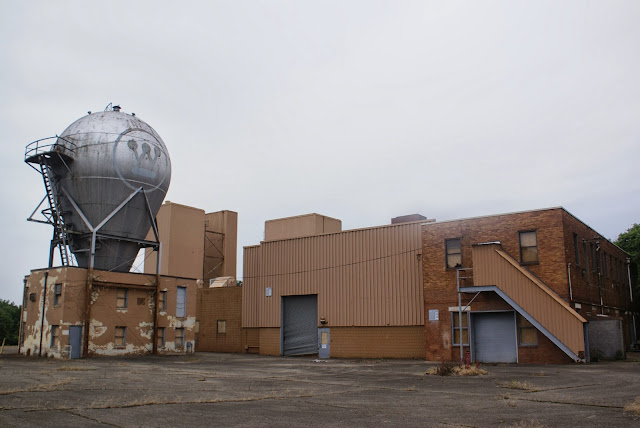 The Atom Smasher is part of the old Westinghouse Research Laboratories. Founded in 1916, the labs were originally set up as the companyâs Mechanics Department to improve their water turbines and electrical generators. They had divisions on metallurgy, magnetics, physics chemistry and mechanics. In 1935, researchers in the nascent nuclear division convinced the company to build the worldâs most powerful particle accelerator. 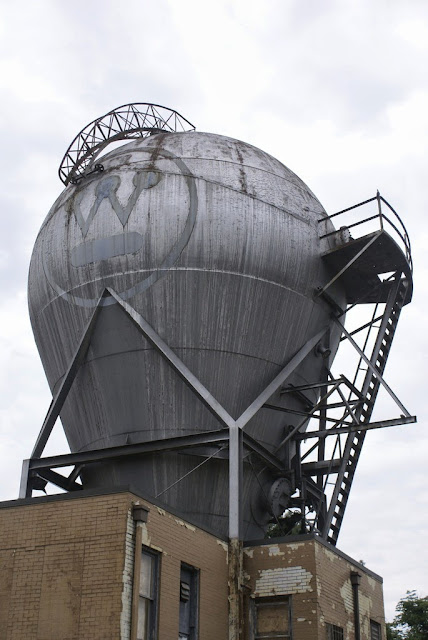 It was a bold move to build the machine. Nuclear fission wouldnât be discovered for two more years and it was unclear what the commercial benefits of a particle accelerator might be. It's hard to imagine a company today investing so much money in a technology without any known uses. 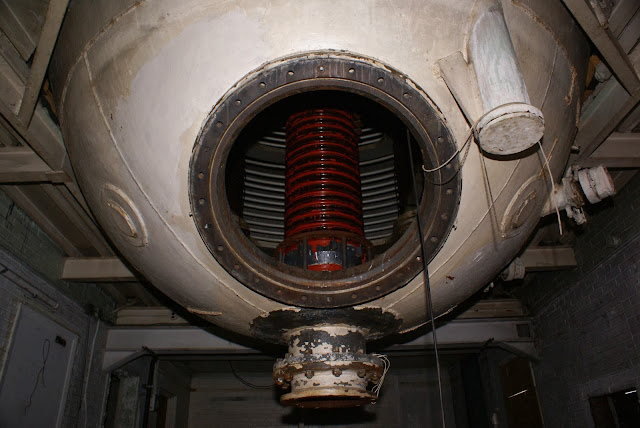 At the time it was completed it was the most powerful accelerator in the world, able to energize particles up to five million electron volts. By comparison, today CERNâs Large Hadron Collider can instill than one million times as much energy into the same kinds of particles. 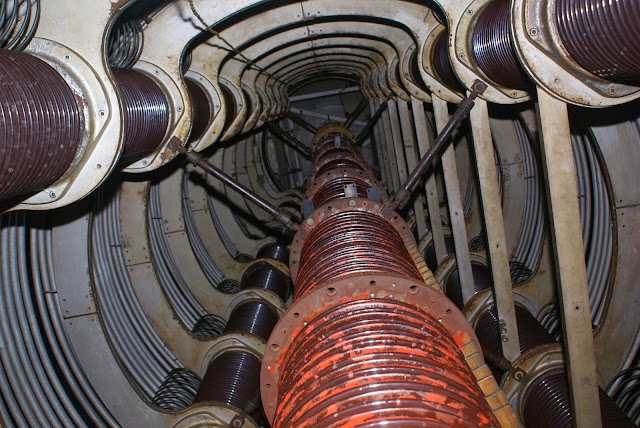 The Westinghouse Atom Smasher is an electrostatic accelerator, which works differently than the cyclotrons being developed by Earnest Lawrence in Berkeley California at the same time. Itâs one of a very few left standing today. 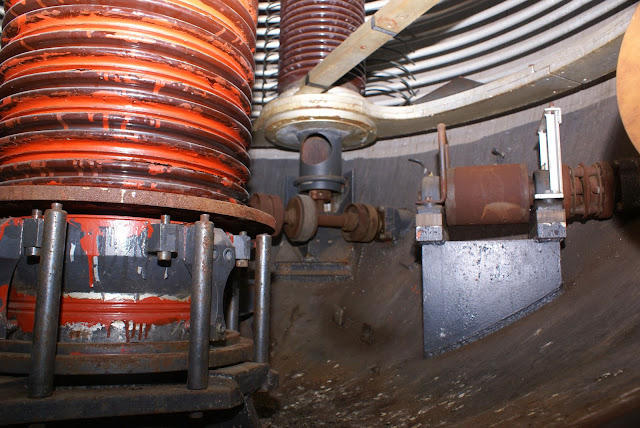 They work the same as a Van de Graaff generator; the electrically charged metal domes that make your hair stand on end when you touch them. In both the classroom science kit and the atom smasher, rubber conveyer belts carry negatively charged electrons away from the metal hemisphere on top, giving its dome a strong positive charge. The smasherâs rollers can be seen on the left, but the conveyer belts are long gone. 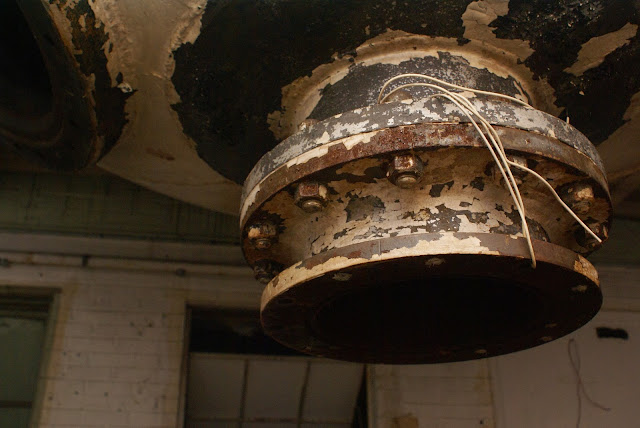 A radioactive filament inside the smasherâs dome released ions into the end of the 47-foot-long beam pipe. The domeâs five-million-Volt charge repelled the positive ions and protons emitted by the filament, sending them shooting straight down the tube at near the speed of light, into experiments below. 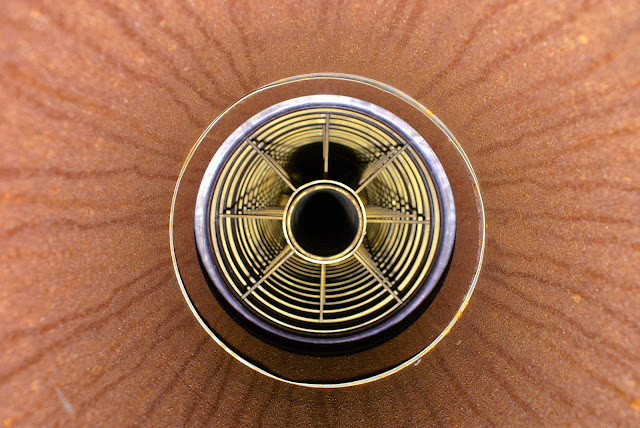 Inside the beam pipe, magnetic fields from electrified wires guided the positively charged ions and protons. 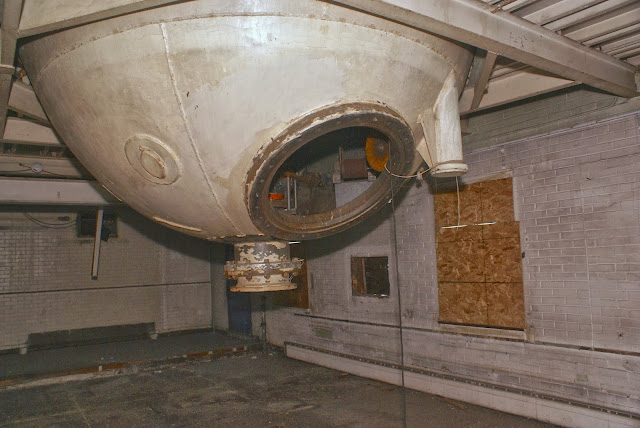 Even after the atom smasher was completed, it was far from obvious that fundamental nuclear research would yield anything useful. Even the associate director of research, Edward CondonÂ tried to keep expectations low. He told the Pittsburgh Post-Gazette in 1940 that he thought it was âout of the question to look to atomic study with the hope of harnessing the atomâs energy for a power plant. We donât expect to put the atom to work in any such way, but we do know that before we can control nature we must understand her.â 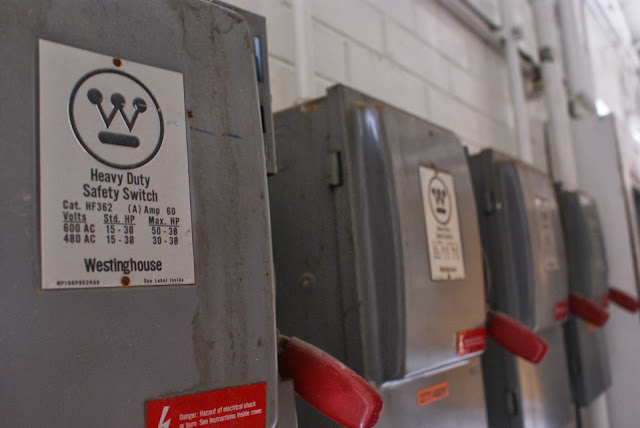 Six years after the smasher was completed, the operators were faced with a crisis. On a frigid February in Schenectady New York there was a huge explosion in a hydrogen storage tank built by the same company that built the smasher, Chicago Bridge and Iron Works. The tank burst not because the flammable hydrogen ignited, but because the steel tank was so brittle it blew apart from the internal pressure alone. All research at the smasher was halted while every weld was X-rayed and defects repaired. 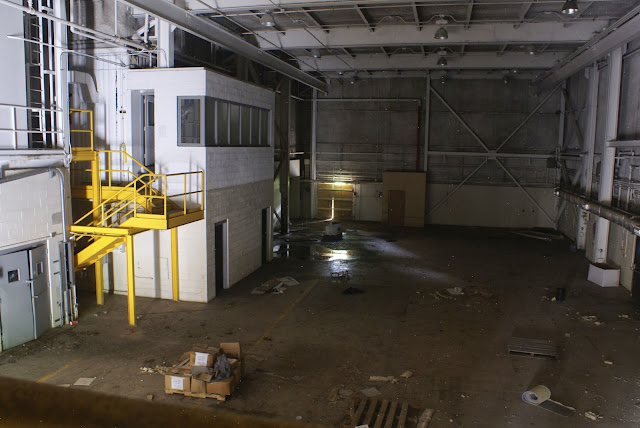 Though the Atom Smasher was the labâs centerpiece, research continued on many other projects. During World War II engineers working at the labâs mechanics department designed some of the earliest jet engine prototypes, microwave technology for radar and gyroscopic controls for tanks. The first centrifuges designed to enrich uranium were developed there as well, though the technology wasnât yet advanced enough for the Manhattan Project. 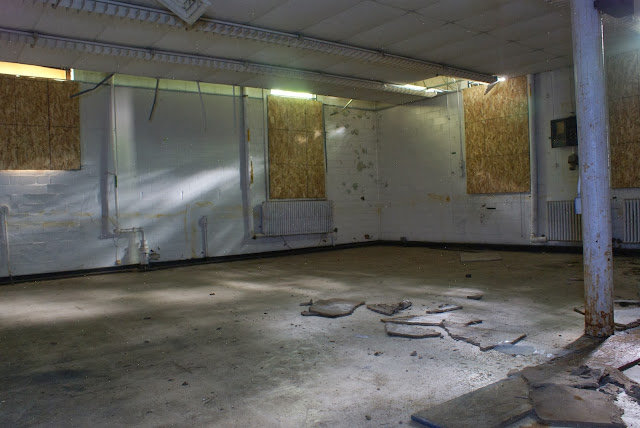 During the war the Atom Smasher itself was shuttered. Most nuclear research was deemed classified, and moved to secret locations like Los Alamos. However the company did have an important, foundational role in the building of the bomb. The Westinghouse Lamp Plant in nearby Bloomfield New Jersey supplied the uranium for Enrico Fermiâs criticality test pile at the University of Chicago, the worldâs first nuclear reactor. 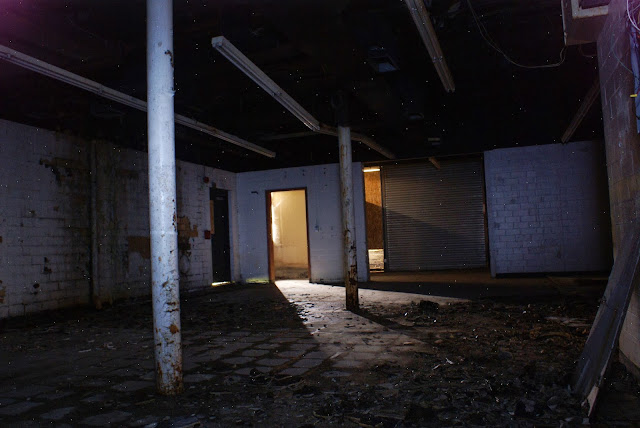 Researchers used the Atom Smasher for years after the war, but by the Eisenhower administration, the machine was beginning to show its age. Cyclotrons had gotten smaller and more powerful and in 1956, Westinghouse announced that it was going build one of its own at a research lab in the next town over. In 1958, they shut the Atom Smasher down for good, though research into reactor technology continued at the lab for decades. 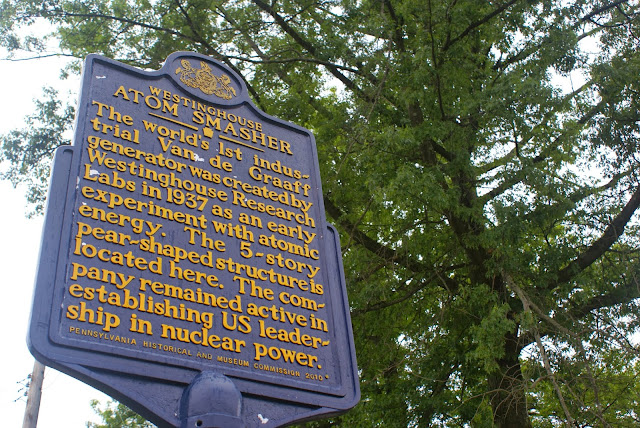 In 1985, the IEEE History Committee designated the smasher as a milestone of engineering in the country. 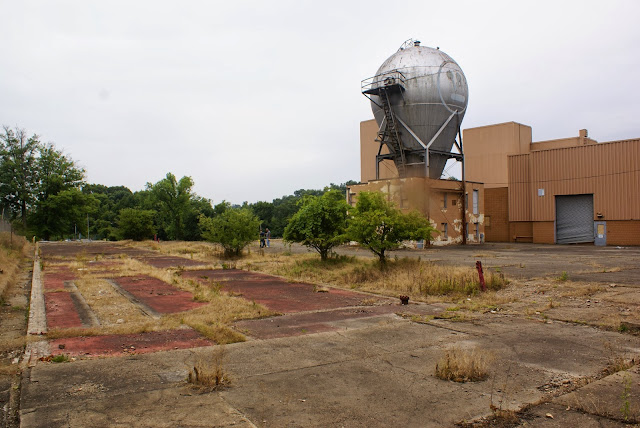 By the early 1990s, Westinghouse was in dire financial straights. It sold off its stake in power distribution in 1994, and merged with CBS the following year. Without a need for fundamental research, the lab closed down in 1996 and has remained vacant ever since. The property has since changed hands several times. Three of the oldest buildings were torn down in 2004. 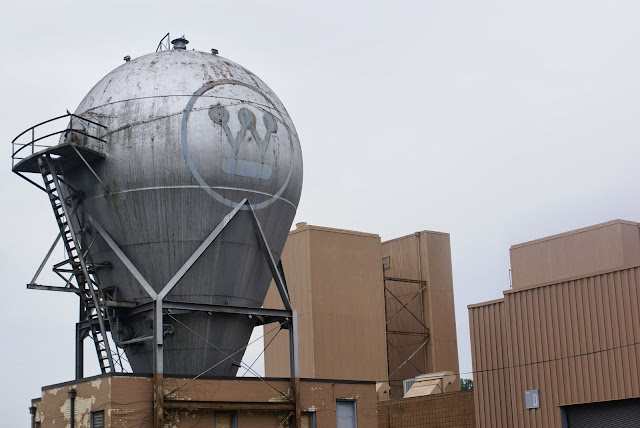 D.C. real estate developer Gary Silversmith bought up the property in April of this year. He has a soft spot for history and also bought and restored what was once the official presidential yacht, the U.S.S. Sequoia.

Though he plans to turn most of the grounds into rental units, Silversmith has been trying to preserve the giant steel Atom Smasher itself. Heâs reached out to the Smithsonian Institute and the Heinz Historical Society to see if there was any way to relocate it, but the 90-ton steel tank is just too massive to move.

His aims to turn it into an interactive education facility, a place for local high schools to come on field trips and learn about science and technology. Heâs been working with the superintendent of the local school district to come up with plans to turn the small brick building at the atom smasherâs base, into classrooms. The Westinghouse Company has funded a study to survey the building. However it could cost at least a million dollars to fully refurbish the accelerator.

I was a part of the Chemistry and Ceramics Department from 1955 thru 1959. I felt like we were a family as everyone so enjoyed what they were doing. Wonderful memories. As I married and became pregnant during my employment at APD it was required at that time I resign at my 6 month point. It is wonderful to see this APD site will become a historical/educational landmark. A special thank you to the historian.

Better than the made up shit of a Kenyan illegal alien being allowed to live in the White House, that's for damn sure.

I hope they follow through and restore this piece of history.

By the way, do you remember the Skybus (developed by Westinghouse) that used to run in South Park. There's some wonderful videos on youtube. Worth a look.

The buildings have been torn down now, and the vessel is on it's side. I'm hoping it's going to be preserved.

I worked there as an engineer from 1974 to 1979 after college. It was a facility for testing nuclear power plant component designs. A lot of good memories. If any of the old crowd read this remember D-loop, J-loop etc.

I've spent my entire life living next to this atom smasher and it would be a travesty for it to be demolished. While I will admit that it is quite the eyesore, simply due to absentee maintenance, it is such an amazing piece of history. I would love to see it refurbished into an educational unit. What some see as an antiquated artifact from a past age, I see as a monument of country's prowess and pride.

adaptive reuse put the building in use again. and they are talking about developing around it. the Nov 7 post makes little sense.

NO it shouldn't, it should be torn the hell down, and re-built to help make this country what it was when this thing was errected in the first place. Stop trying to protect the land we have. Industrial Archeology...WTF kinda made up shit is that

When I was a kid, we'd go to my grandparent's place in Wilkinsburg for Sunday dinner. My parents would always point this out to us as we drove by. I will always remember the sense of awe/pride/reverence that they conveyed to us. Fifty years later and I had to send articles into school to correct my daughter's science teacher who INSISTED that the first atom was smashed in Chicago. Pittsburgh's technical heritage needs to be preserved.
Glad it's not going to the scrap heap (we hope).

Old Westinghouse atom smasher may have future as classroom
http://www.post-gazette.com/.../stories/201309010238

Old Westinghouse atom smasher may have future as classroom
www.post-gazette.com

This is a really awesome piece of our history and the onset of the atomic age. It's wonderful that the new owner has chosen to preserve it for future generations.

It should be a protected industrial archeology site! Such a place should be preserved for the coming generations!
Regards,
Mauro.