The Tasty Physics of Eating Candy

With the Ig Nobel Prizes just around the corner, there's at least one more entry worthy of consideration: research on the physics of maximally satisfying candy consumption. Yesterday, a team of Austrian physicists posted a preprint of their research paper titled, "Sticky physics of joy: On the dissolution of spherical candies."

Don't be fooled by the title, however; candy physics is serious business! As the authors note in their abstract, "Serious questions on the optimal strategy of enjoying a candy will be addressed, like whether it is wise to split the candy by breaking it with the teeth or not."

Read on for some curious confection physics.

For their research study, Andreas Windisch from the University of Graz in Austria and his colleagues first developed a physical model for the disintegration of candy. They wanted to model the decrease in candy mass over time to find ways to minimize this disintegration.

After developing their model, the researchers naturally tested it against experimental evidence. Unfortunately for the research team, they decided not to test the candy dissolution process on themselves. Instead, they dissolved the candy over time in a water bath while periodically taking photographs to measure the candies' radii. 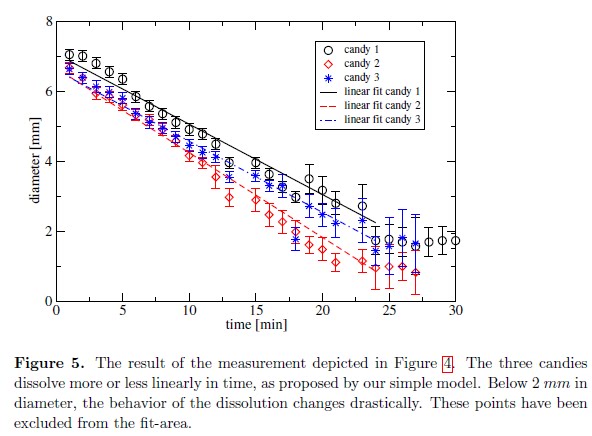 Image courtesy of Windisch et al. via their arXiv article.

Their model passed the test â for the most part. Once the unspecified candies reached a certain point, however, the radii no longer dissolved at an approximately constant rate. The researchers contacted the candy manufacturers and discovered that the candies' denser cores were to blame.

The Key to Longer Lasting Candy

If you want to make your candy last, the authors advise you to maintain a spherical shape as long as possible. Of all three dimensional shapes, spheres have the smallest surface area to volume ratio. Additionally, surface area drives the dissolution of candy: the larger the surface area, the faster the candy disintegrates. Combining these two facts suggests that you should keep you candy spherical to make it last longer.

But the authors ultimately suggest you disregard the physics of candy eating if you want to truly enjoy the experience:

"Even though we now know how candies dissolve in time we stress that the best thing to do when eating a candy is to forget about these considerations, since they draw your attention away from what candies are made for: enjoyment."

This comment has been removed by a blog administrator.