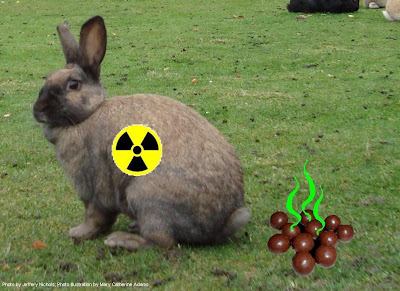 A radioactive rabbit that was on the loose this week in the Hanford former nuclear reactor site in Washington state prompted state Department of Health workers to hunt for contaminated rabbit droppings in the area.

The radioactive rabbit was among several bunnies captured over the last few days (a scene which calls to mind an iconic moment in Monty Python and the Holy Grail) at the site near Richland, Wash. The hopping critters were rounded up for testing after contaminated rabbit droppings were found last week. Only one rabbit tested positive for radiation contamination.

State department of health workers used hand-held radiation-detecting instruments to look for contaminated droppings. After capturing the afflicted rabbit, the amount of tainted droppings they found decreased, leading them to believe only one rabbit was affected. None of the droppings, so far, have been found in areas accessible to the public.

Washington Closure Hanford, the group responsible for cleaning up the former nuclear reactor site, thought the rabbit was most likely poisoned near the recently demolished 327 building. The building had been used during the Cold War to test highly radioactive materials in the process of creating plutonium for the United States' nuclear weapons program.

Workers think the rabbit probably drank water containing radioactive cesium that had pooled in the building's basement. They had sprayed water to keep dust at bay while demolishing the building about a month ago. 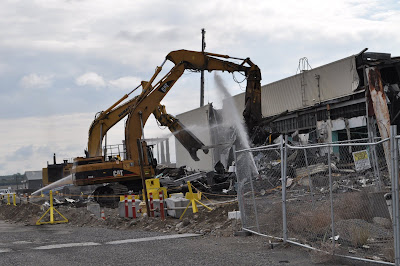 Radioactive cesium is one of the more potent types of radioactive materials. Though it washes out of the human body fairly quickly in sweat and urine, small doses (of 4.1 micrograms) have proven to be lethal to dogs who died within a few weeks of exposure to it.

To keep animals out, Washington Closure workers installed a chain-link fence around the building and scented the perimeter with fox urine to discourage burrowing animal visitors. The workers also removed vegetation that might attract hungry animals and covered suspected areas of contamination with gravel and steel plates.

For years, animals have wandered onto the site from time to time and become contaminated. In 2003, workers removed radioactive mud dauber wasps' nests that were found scattered across six acres of the site. The wasps had used sullied mud created from water sprayed at another demolition site to build their nests.

In 1998, radioactive gnats and flies munched on discarded banana peels and apple cores in trash that was then taken to the Richland landfill. Thirty five tons of rubbish that might have mixed with the contaminated Hanford waste had to be unearthed and returned to the nuclear reactor site.

Sadly, the unfortunate rabbit involved in the latest contamination calamity was euthanized and disposed of as radioactive waste.
Posted by Unknown