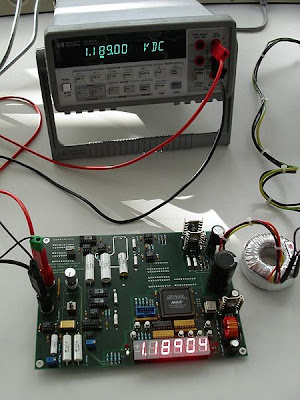 Those darn physicists are at it again...

Part of the Omaha, Neb., airport was shut down briefly on Wednesday after TSA security screening personnel found suspicious items in a carry-on bag that belonged to someone returning home from the American Association of Physics Teachers (AAPT) summer meeting.

According to an article from the Omaha World-Herald, the Omaha Police Department's bomb squad was called to the airport's Terminal B just before noon on Wednesday to attend to a "suspicious-looking item" in a carry-on bag. Screening was halted and the B concourse was evacuated, the World-Herald said, though operations in the airport's other terminal remained unaffected.

[At left, a voltmeter or a bomb? Photo by Thomas Hirsch.]

The newspaper reported that, according to an FBI spokesperson, an Oregon college student's science project was the culprit. The student had been at the AAPT meeting and had submitted his or her project in the meeting's apparatus competition. After about two hours the suspicious items were deemed safe and the airport was cleared, but nine flights were delayed as a result.

The FBI, according to the newspaper, did not give any details about what related to the student's project appeared suspicious, but the Facebook physics community is passing around rumors about what it might have been. One friend of a friend who was at the meeting suggested that the suspicious items might have been a combination of a voltmeter (a device used to measure electricity - perhaps one like this, or like one of the two in the photo above) and a portable spectrometer (a device used to measure light - perhaps like this one).

Those items don't (to me, and likely to many physicists/lab technicians) look overly suspicious, though I suppose if you use your imagination, a voltmeter could look something like a Hollywood bomb, with it's digital screen (countdown clock?) and stray wires (used to measure volts).

The TSA web site doesn't explicitly list anything similar to a voltmeter, multimeter or spectrometer as prohibited items in either carry-on or checked luggage. In fact, the only thing that comes close (and is not allowed in either) is "Realistic Replicas of Explosives," which is still a bit of a stretch. Still, you can't blame the TSA for treating what looks to them like a weapon as a weapon.

[Omaha, Nebraska's, Eppley Airfield. Photo by Americasroof.]
Assuming my Facebook informant is in error, there's still no shortage of physics demo ingredients that might look suspicious. The TSA doesn't allow anything that even remotely looks like a weapon or that could be used as part of a weapon in a carry-on. This includes things like most sharp objects (scissors with blades shorter than four inches are an exception), gun powder, parts of guns and firearms, drill bits, gel-type candles, and other items that might make their way into otherwise harmless physics demonstrations.

Furthermore, the restrictions AAPT places on physics demos are few: Demos must be new, previously unpublished and not commercially available. There are no apparent restrictions on the materials used in demos.

So who's to blame for the two-hour hiccup? Ultimately, no one. For many a physicist, voltmeters and spectrometers are a part of everyday life and might not ever be considered weapon-like and therefore unsuitable for carry-on bags. That said, the TSA did their job and though the nation's air traffic was briefly disrupted, as the old saying goes, it's better to be safe than sorry.

Physicists and physics teachers meet twice a year for the AAPT meetings, where ideas on physics education are exchanged and physics teachers can check out the latest physics equipment and textbooks. This summer's meeting was held in Omaha July 30 through Aug. 3. The apparatus competition was created to find and reward new ways to teach physics through demonstrations and experiments and is held annually during the AAPT summer meeting.

[For a few photos of TSA personnel screening the airport terminal, click here.]
Posted by Unknown

The previous comments are amazing (the good kind, not the sarcastic variety). Except for the first post of Monday, August 8, 2011 at 3:01 PM, I find thoughtful, level-headed comments on the article. As a reasonably educated person employed in the aviation industry, I would venture that the number of people on this planet who could identify every piece of mechanical and electronic equipment that exists is very small. For the authorities to take those actions and resolve the issue in a timely manner is commendable. No one, not even TSA officials, claim that the system is perfect but it does appear to have worked so far. Changes are coming, one step at a time. Until then, keep up the good work. I pray that no one becomes complacent resulting in a headline such as, "Bomb Disguised As A Physics Apparatus Destroys Airport (Oops.)"

P.S. Speaking of Australia, anyone know the phone number for Thunderdome? I would like to book a room for my vacation next month. :-)

I think people making comments should have a little more respect for airport security personnel. (a) As a Physicist myself I do not find it unreasonable that a non-technical person looking for suspicious objects might be concerned about what is described as a student project device. And that security person acted correctly and should be commended for their vigilance. (b) The often seen implication that airport screeners have to be dumb is gratuitously insulting. Not everyone comes from economically advantageous backgrounds. Some of the cleverest people I've met were in what some might consider menial jobs. Honest work is not to be disparaged.

It's an Altera FPGA evaluation board. Kinda like an arduino for pros! It is apparently programmed to measure voltage.

Whoever posted the first comment needs to learn some manners... I'm sure wherever you're from isn't perfect. Also, no matter how much money the US devotes to education there will always be kids who just don't want to learn because they're "too cool" or not smart enough, just like most other countries. Those are the people who end up with jobs at airports generally.

At least the USA is better off than a country like Australia. I saw Mad Max. That was a frightening documentary.

This is exactly why USA needs to spend more money on the education system and not keep the population living in fear and ignorance. This is just dumb, only in America.....P.S. how is your stock market crash coming along, may be you need to spend a few years living in the dark ages so you can re-appreciate life again.