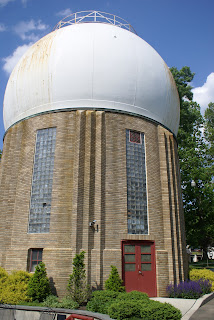 There's a derelict atom smasher nestled in the middle of suburban Washington DC.Â The old Atomic Physics ObservatoryÂ sits in the middle of theÂ Carnegie Institution's Department of Terrestrial Magnetism, a scientific research campus in the city's Chevy Chase neighborhood.Â
The APO was named and likewise designed to look like an astronomical observatory, in hopes that the nearby residents wouldn't put up too much of a fuss when the Department of Terrestrial Magnetism built a particle accelerator in the well-off suburb.Â
When it was built in 1938, it was one of the most powerful particle accelerators in the the world. Less than a year after it was first turned on, it played an important role in confirming theÂ nuclear fissionÂ of uranium, the discovery that directly lead to the atomic bomb. Today, it's mostly used to store garden tools. The maintenance staff let us look around at what's left of the old machine. 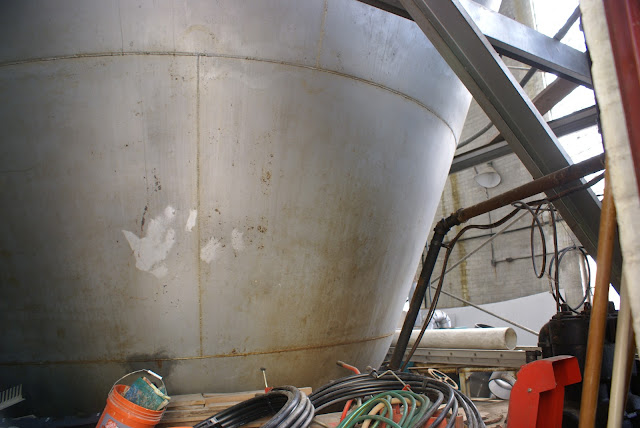 Walking in through the front door, one's vision is almost entirely taken up by the gigantic, upside-down pear-shaped pressure tank taking up most of the building. Inside is the accelerator. It's a Van de Graaff accelerator, very different than most accelerators used today. It uses static electricity to shoot ions down a beam pipe to a target room below.Â 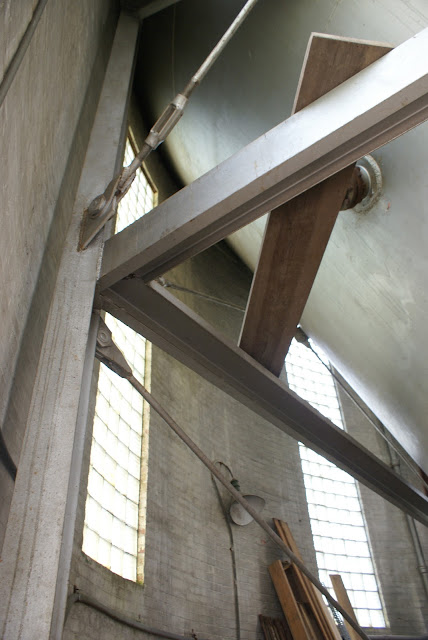 At its widest point, the tank is 37.5 feet across and pressurized up to 50 psi of compressed air. The tank was built by Chicago Bridge and Iron Works who specialized in building tanks for natural gas. Its hermetic seal kept the humid DC summers from shorting out the static electricity generator inside, and the high pressure helped it store tremendous charge. 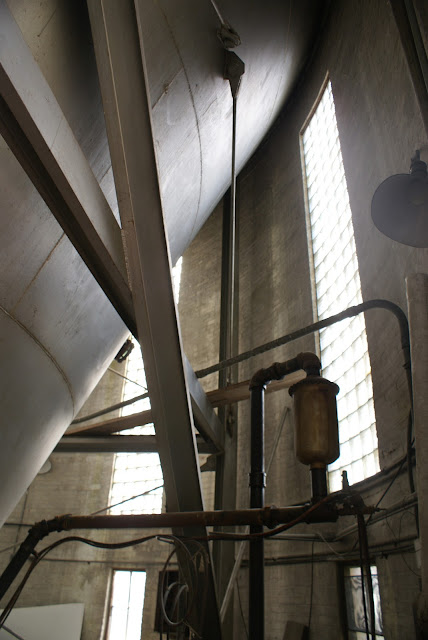 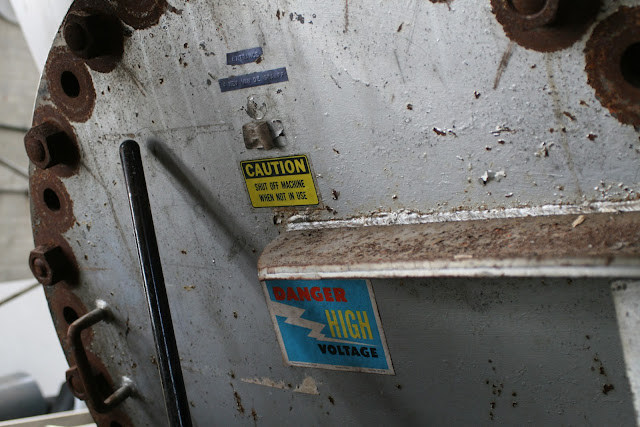 We wanted to Â take a peek inside of the tank but the only hatch leading inside looks like it hasn't been opened in ages.Â 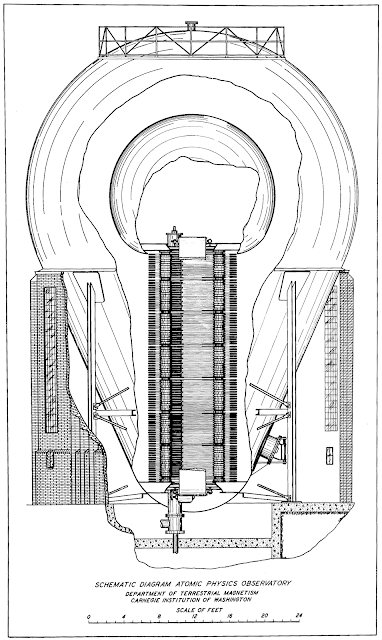 This cutaway of the accelerator shows what we were missing. Inside there's a flattened steel sphere sitting on top of of four 26-foot-tall posts. A moving conveyer belt carried away electrons from the Â suspended spheroid, giving it a strong positive charge. Inside, a small filament emitted positive ions at the end of a long pipe leading straight down. The ions each had one proton and one neutron. The positive charge of the steel dome repelled the positively charged protons, shooting it and the neutron it was attached to down the pipe at incredible speeds. Magnets guided and focused the beam of ions. Near the end, the positive protons would be sheared off, leaving only a stream of neutrons behind.Â (Carnegie Institution) 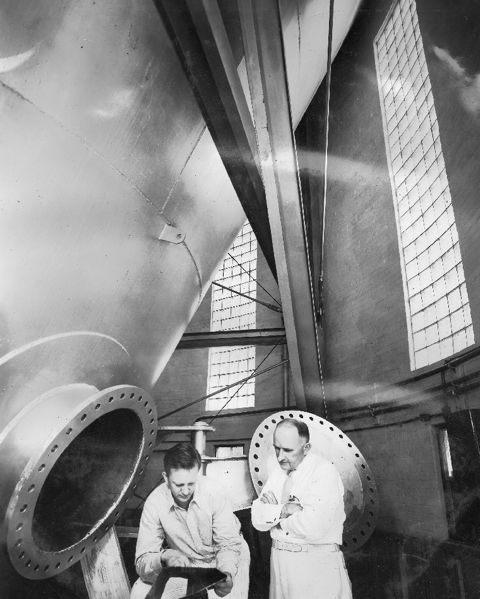 Â These guys didn't seem to have any problems opening up the hatch. (CarnegieÂ Institution) 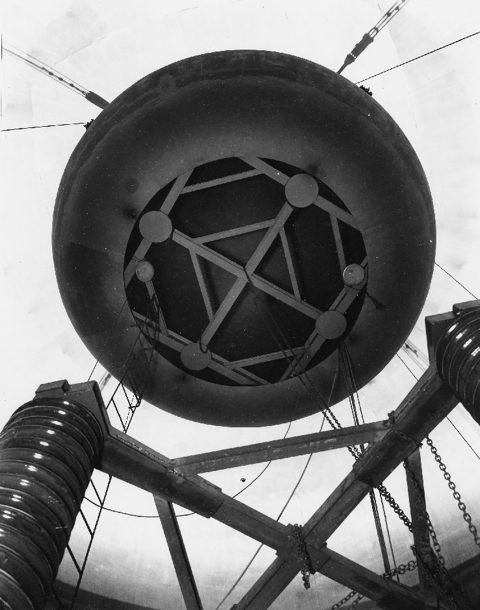 This old photo taken from inside of the tank looking up shows the spheroid while its being installed back in the '30s. Notice the beam pipe isn't in place yet.Â (CarnegieÂ Institution) 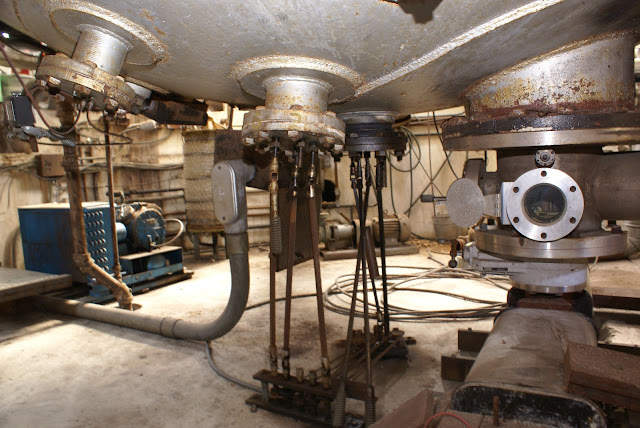 Underneath the pressure tank is a space where scientists could access different controls and measuring equipment.Â On the far right is the beam pipe as it exits out of the pressure tank and leads into the target room below. There's all kind of old equipment and gauges that haven't been used since the facility was shuttered in the 1970s. 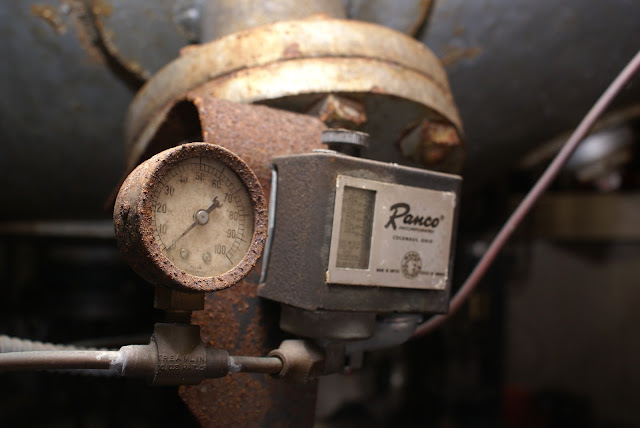 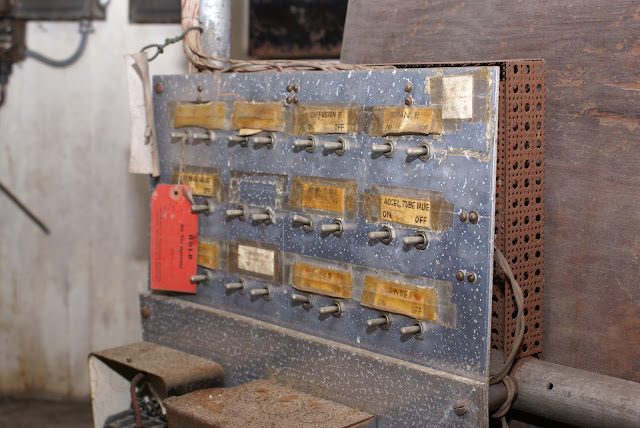 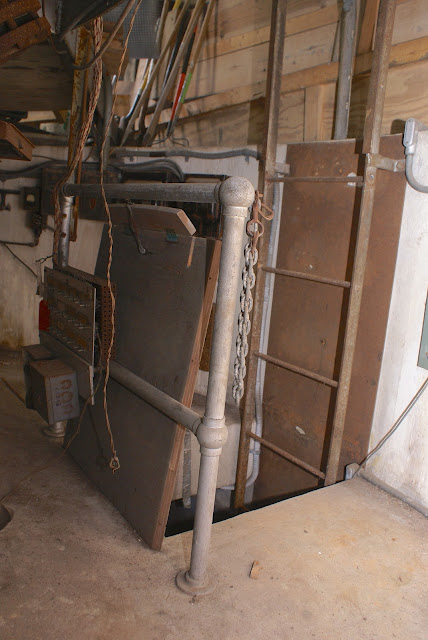 A ladder leads down to the target room. It looked pretty rickety, so we opted to take the tunnel from the building next door.Â 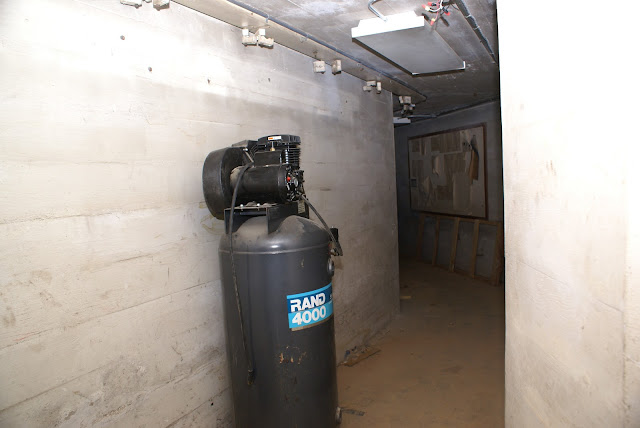 The concrete hallway zig-zags to prevent dangerous X-rays from escaping from the target room. 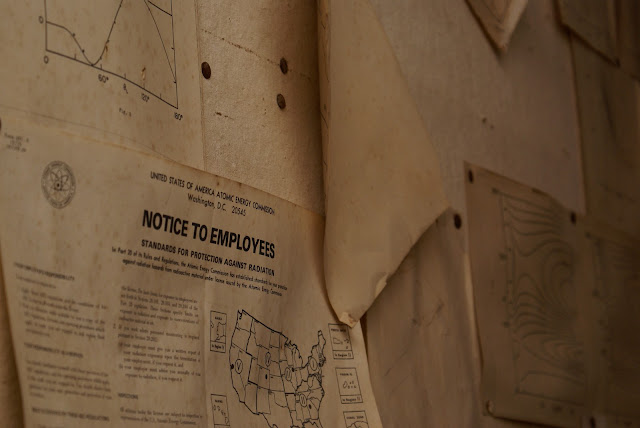 The results of decades-old experiments are still tacked up on bulletin boards. The "Notice to Employees" about radiation protection bears the seal of the old Atomic Energy Commission, which ceased to exist in 1975. 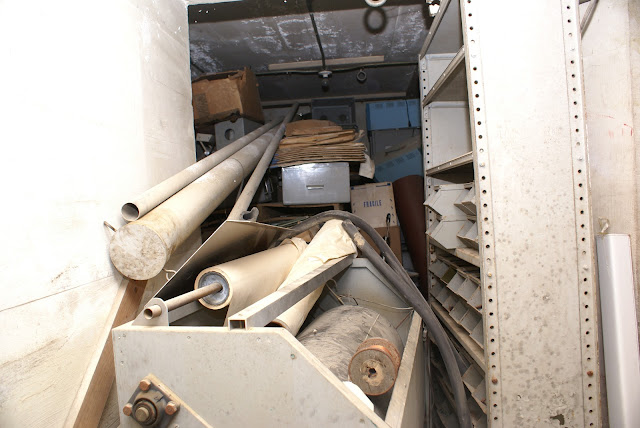 One room off to the side looks like it used to hold spare parts for the machine. Now it seems to be a catch-all for all kinds of old equipment from around the lab.Â 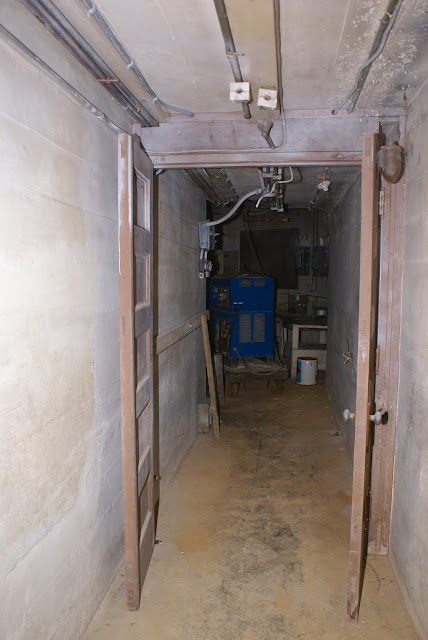 Two wooden doors lead to the target chamber. Along the walls are notes written in pencil of when the he ion source was last refilled with deuterium.Â 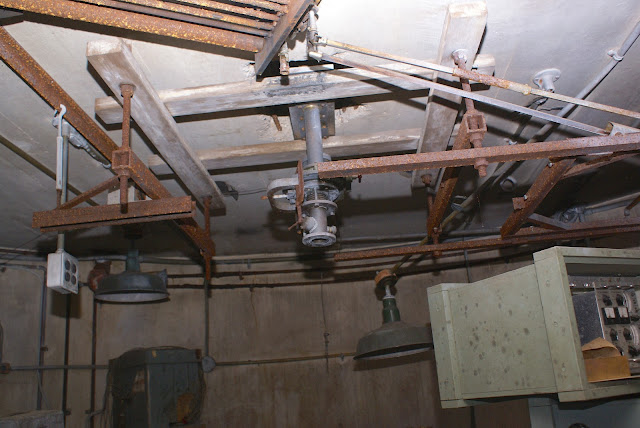 High energy neutrons cascaded down through the beam pipe from the accelerator above. The tube would have continued down onto a table where researchers couldÂ irradiate whatever samples they needed to.Â 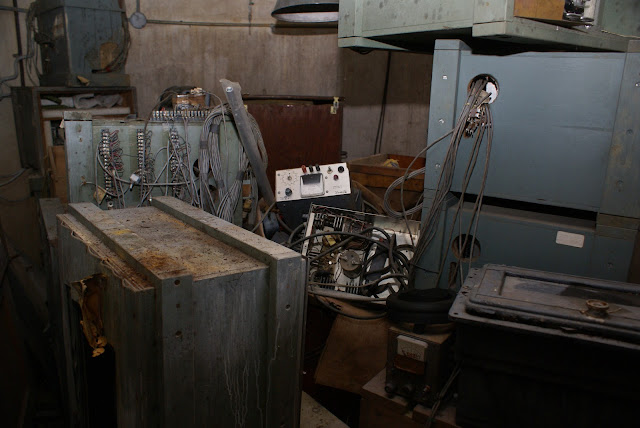 Now, most of the space is stacked floor to ceiling with derelict equipment. Over the years the laboratory has done research on Earth's magnetic fields, seismology, astronomy and nuclear physics. There's probably a bit of everything in here somewhere. 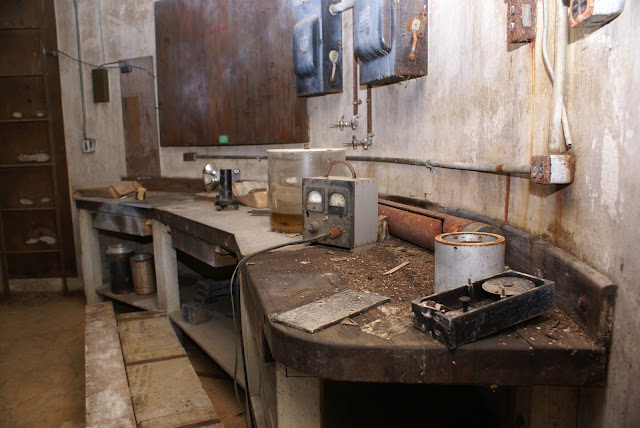 The APO played a central role at a pivotal moment in 20th century physics history.Â In January of 1939, Niels Bohr arrived in the United States with important news. Just a few weeks earlier, Otto Hahn, Fritz Strassmann and Lise Meitner in Germany discovered that when they bombarded uranium samples with neutrons the atoms split apart into two atoms of barium, releasing tremendous energy in the process. They had discovered nuclear fission.

Bohr broke the news of the discovery at a physics conference in downtown Washington DC. Two physicists sitting in the back of the room, Richard Roberts and Lawrence Hafstad, shot each other excited glances and bolted across town. They fired up the APO and within 48 hours, had replicated the experiment using their new particle accelerator. 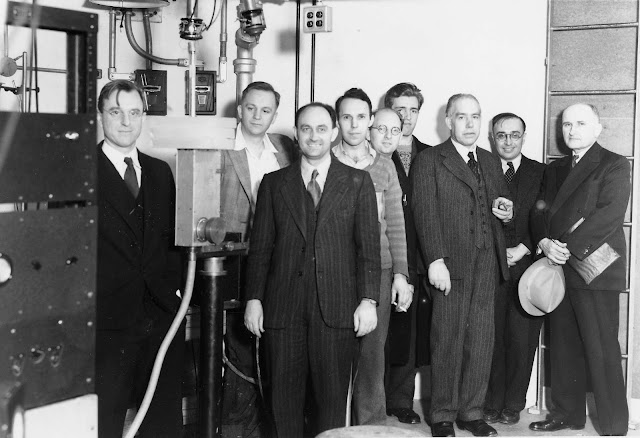 Attendees of the conference showed up to see the results and brought along a reporter. Within a day, the world learned about the imminent arrival of atomic energy. The physicists snapped a photo inside the target room just after the demonstration of fission. From left to right Robert Meyer, Merle Tuve (who designed and built the APO), Enrico Fermi, Roberts, Leon Rosenfeld, Erik Bohr, Niels Bohr, Gregory Breit and John Fleming. Edward Teller was still upstairs when the photo was snapped.Â (CarnegieÂ Institution) 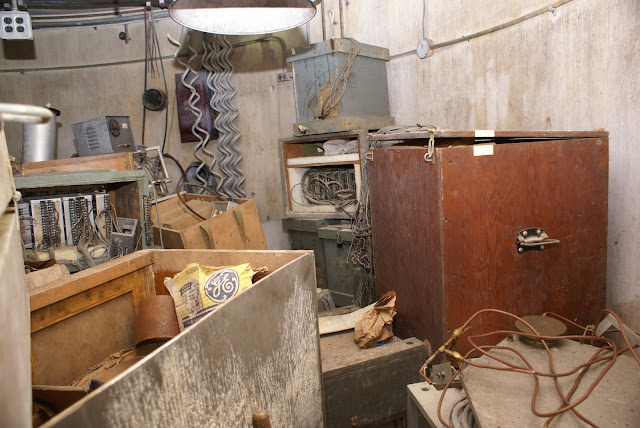 The APO wasn't used at all during World War II. Just about all nuclear research was classified and focused on building the atomic bomb in New Mexico. The Department of Terrestrial Magnetism devoted itself to designing the proximity fuzeÂ for rockets instead. 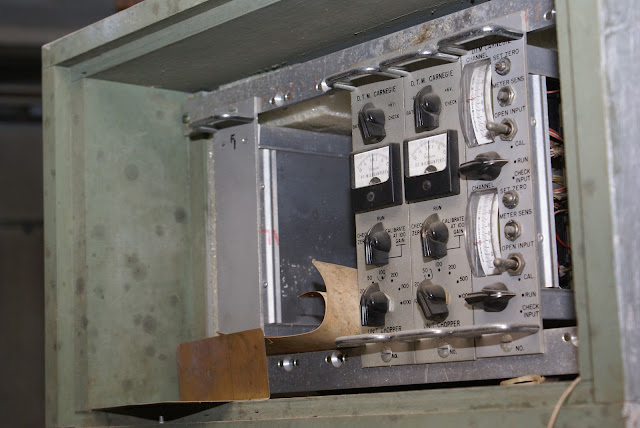 After the war, research at the APO started up again, studying the nuclear structure of hundreds of atomic isotopes. In the 1960s scientists updated the machine to fire polarized protons, investigating the structure of unstable, short-lived nuclei. In 1975, the machine had finally outlived its usefulness, and was deactivated for good.

I couldn't help but wonder what would it would have been like to see the old machine active. Turns out, in 2010 nonfiction artist Jim Sanborn rebuilt an earlier prototype of the APO for an art installation in Denver. He scoured through old blueprints and schematics he found in the Carnegie archive, and built an exact working replica of the machine. Then, like Roberts andÂ Hafstad, he used it to fission uranium of his own.Â

INTERNATIONAL CONCEPT OF WORK FROM HOME
Work from home theory is fast gaining popularity because of the freedom and flexibility that comes with it. Since one is not bound by fixed working hours, they can schedule their work at the time when they feel most productive and convenient to them. Women & Men benefit a lot from this concept of work since they can balance their home and work perfectly. People mostly find that in this situation, their productivity is higher and stress levels lower. Those who like isolation and a tranquil work environment also tend to prefer this way of working. Today, with the kind of communication networks available, millions of people worldwide are considering this option.

Women & Men who want to be independent but cannot afford to leave their responsibilities at home aside will benefit a lot from this concept of work. It makes it easier to maintain a healthy balance between home and work. The family doesn't get neglected and you can get your work done too. You can thus effectively juggle home responsibilities with your career. Working from home is definitely a viable option but it also needs a lot of hard work and discipline. You have to make a time schedule for yourself and stick to it. There will be a time frame of course for any job you take up and you have to fulfill that project within that time frame.

There are many things that can be done working from home. A few of them is listed below that will give you a general idea about the benefits of this concept.

Baby-sitting
This is the most common and highly preferred job that Women & Men like doing. Since in today's competitive world both the parents have to work they need a secure place to leave behind their children who will take care of them and parents can also relax without being worried all the time. In this job you don't require any degree or qualifications. You only have to know how to take care of children. Parents are happy to pay handsome salary and you can also earn a lot without putting too much of an effort.

Nursery
For those who have a garden or an open space at your disposal and are also interested in gardening can go for this method of earning money. If given proper time and efforts nursery business can flourish very well and you will earn handsomely. But just as all jobs establishing it will be a bit difficult but the end results are outstanding.

Freelance
Freelance can be in different wings. Either you can be a freelance reporter or a freelance photographer. You can also do designing or be in the advertising field doing project on your own. Being independent and working independently will depend on your field of work and the availability of its worth in the market. If you like doing jewellery designing you can do that at home totally independently. You can also work on freelancing as a marketing executive working from home. Wanna know more, email us on workfromhome.otr214425@gmail.com and we will send you information on how you can actually work as a marketing freelancer.


Internet related work
This is a very vast field and here sky is the limit. All you need is a computer and Internet facility. Whatever field you are into work at home is perfect match in the software field. You can match your time according to your convenience and complete whatever projects you get. To learn more about how to work from home, contact us today on workfromhome.otr2144225@gmail.comand our team will get you started on some excellent work from home projects.


Diet food
Since now a days Women & Men are more conscious of the food that they eat hence they prefer to have homemade low cal food and if you can start supplying low cal food to various offices then it will be a very good source of income and not too much of efforts. You can hire a few ladies who will help you out and this can be a good business.

Thus think over this concept and go ahead.

A system like this, a business is able to communicate with business clients, employees and even with other business firms. They can also just do other business transactions within the office simply by making phone calls to clients and associates. Read this Business Phone Service.

PBX is ideal for small business and entrepreneurs. It gives a professional image and make sure that you don't miss a single call. Few months back, I decided to buy PBX from Telcan. You can get more information here: PBX