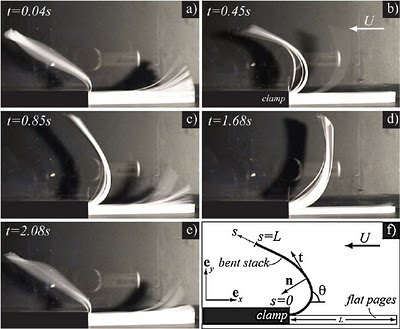 Some of the things physicists strive to explain are important: the nature of time, what are the smallest building blocks of matter, how and why gravity works, the origin of the universe, . . .

Some things on the other hand, are (how should I put this?) . . . less grand. The thing is, I find many of the most interesting problems to be among the seemingly least important.

Why, for instance, does spaghetti almost always break into three or more pieces when you bend it, rather than simply splitting in two? 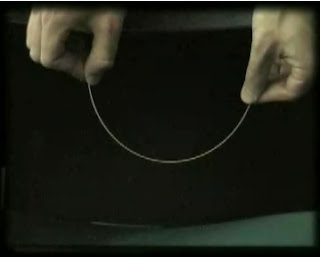 Why on Earth does a tippe top flip over?


What would happen if you tried to run a lawn sprinkler backwards, under water?

All three of these problems are apparently mundane. And all are pretty tough, mathematically speaking.

Now a group of physicists have turned their attention to the physics of a clapping book. You know what I mean - take a book open it up outside on a breezy day, and watch the pages flap back and forth. To make things as clear as possible, they put their book in a wind tunnel rather than leaving it on a park bench.

The way the pages move appears simple enough, but trying to describe it in physics terms is a real bear. I've read the paper, The Clapping Book:Wind-Driven Oscillations in a Stack of Elastic Sheets, by P. Buchak,C. Eloy, and P. M. Reis, which is due out in Physical Review Letters next week, and even though I can't claim to follow the math, I'm glad their on top of the problem.

It's not all fun and games, of course. The lesson they learn from the challenging problem will help solve other problems like how wind affects buildings and bridges, as well as giving us insight into biological phenomena like blood flow, swimming, flying and snoring.