Maurice Goldhaber: A lifetime of physics 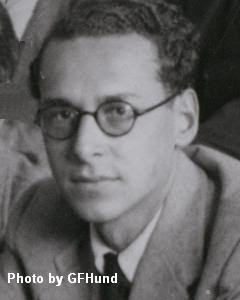 Maurice Goldhaber, an Austrian-born American physicist who helped establish the standard model of particle physics and a former American Physical Society president, died at his Long Island, N.Y., home on May 11. Goldhaber was 100.

[Maurice Goldhaber in 1937.]
Goldhaber's studies of subatomic physics helped to establish the standard model of particle physics. In 1934, he and his colleague James Chadwick made the first accurate measurement of the mass of a neutron. Chadwick had first discovered the neutron in 1932. Back then, scientists thought the neutron was a combination of a proton and an electron. The measurements helped show that it is a distinct particle.

Goldhaber also contributed to the understanding of particle spin. Scientists once believed that the spin of a particle would go clockwise as often as it would go counterclockwise. Goldhaber and his colleagues showed in 1957 that neutrinos spin only in one direction. Neutrinos are those elusive particles that zip through matter without being altered or very easily detected. Their discovery changed the way scientists thought about elementary particles.

Goldhaber was the director of Brookhaven National Laboratory from 1961 to 1973. During that time, three major discoveries made at the lab resulted in Nobel Prizes. Though Goldhaber officially retired in 1985, he continued to do research at the lab well after his 90th birthday.

Goldhaber was born in Lemberg, Austria, on April 18, 1911. He was studying at the graduate level at the University of Berlin in the early 1930s. As the Nazi regime took over central Europe, Goldhaber fled to the United Kingdom. There, he worked with Ernest Rutherford, discoverer of the atomic nucleus, at Cambridge University. He earned his Ph.D. in physics from Cambridge in 1936. Goldhaber then went to the United States in 1938 where he joined the faculty at the University of Illinois. He became a senior scientist at Brookhaven in 1950. He served as the president of the American Physical Society (APS) in 1982. 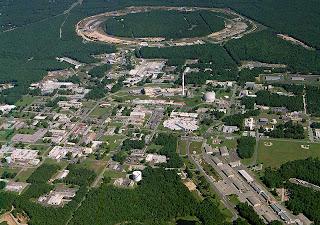 [Brookhaven National Laboratory]
Physics was an integral part of Goldhaber's life and a common thread through generations of family. Goldhaber was married to a nuclear physicist named Gertrude Scharff-Goldhaber. She also fled Europe in the 1930s and worked with him at Brookhaven. Goldhaber's son Alfred Scharff Goldhaber is a physics professor at SUNY Stony Brook. Alfred's son David Goldhaber-Gordon (Goldhaber's grandson) is an assistant professor of physics at Stanford.

Martin Blume, a former editor and chief of the APS journals who used to carpool with Goldhaber, said to The New York Times that the physicist had "an idea a minute."

"I had a hard time keeping Maurice quiet," Blume said to the Times. "He did not have very much sympathy for someone just trying to focus on getting there alive. Sometimes I had to put my hand across his face to stop him from talking."

Peter Bond, the senior adviser to the director of Brookhaven lab, said in a Brookhaven statement that one of his favorite things Goldhaber once quipped is that "Physics teaches old things to new people."
Posted by Unknown