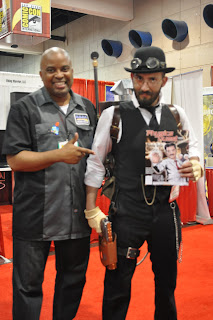 Few people pass up swag at a convention based around all the free stuff you can carry and most snatch up our "free physics comic books" as they walk past the booth. But we get the rest with our calls of "read about Tesla vs. the nefarious Thomas Edison!" Who's going to defend a man that electrecuted elephants as propaganda science demos?

Maybe it's the steampunk craze sweeping the geekdom, but people love Nikola Tesla. He's a nerd pop-culture icon around these parts. Tesla costumes, Tesla Shirts, Tesla the dog, Tesla theories about Tunguska; we've seen it all. One gentleman even came by the booth in a steampunk Tesla costume with his girlfriend dressed as a pigeon. Another's reponse to our accurate physics comic book on the history of Tesla and his battle vs. Thomas Edison for electric world domination was "awesome, everyone's doing that now!" 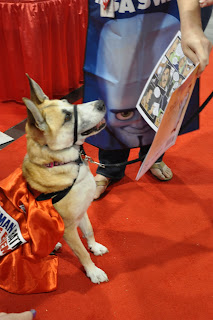 APS comics haven't gone "mainstream," but Tesla cartoonists really are more common than I could have ever guessed. Jeff Smith, the very famous cartoonist and creator of Bone, is our booth neighbor and he has a deep love for Tesla an upcoming Smith comic features the original mad scientist. Three or four other cartoonists have also stopped by the booth and told us about comics they'd done that involve Tesla.

I doubt APS is in danger of selling out, but it's nice to be appreciated. And sometimes it's even nice to ride the bandwagon, especially if it gets people excited about physics. 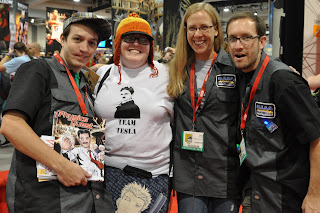