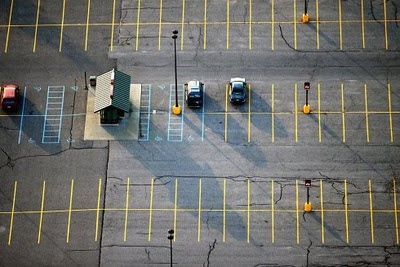 Next time you're searching for a parking space and someone grabs a spot from right in front of you, it might seem like the last space left on Earth, but ponder this: there are at least 500 million empty spaces in the United States at any given time.

The 250 million cars and trucks on America's roads get a bad rap for being environmentally unfriendly. Climate scientists say that automobiles add an array of greenhouse gases and harmful particulates into the Earth's atmosphere, yet little research has been done to estimate the impact parking spaces -- where those automobiles spend 95 percent of their time -- have on our planet.

"I think it's a surprisingly unknown quantity," said Donald Shoup, a UCLA urban planning professor and author of the book "The High Cost of Free Parking." "[Parking] is the single biggest land use in any city. It's kind of like dark matter in the universe, we know it's there, but we don't have any idea how much there is."

Civil engineers at the University of California, Berkeley recently published the first comprehensive estimate of parking spaces in America and found that the energy use and materials associated with creating hundreds of millions of parking spaces has a significant environmental impact.

The group had already published a study aimed at finding the environmental impact of America's total transportation infrastructure, but when they tried to estimate the impact of the nation's automobile infrastructure, they were forced to use the only existing national parking spaces study -- a count of just the 100 million metered parking spaces in the United States. A number of other environmental engineers were quick to call out the obvious limitations of using such a small number and convinced the team to attempt the first ever nation-wide count of parking spaces.

"We got some feedback from people saying 'We think you guys are drastically underestimating the amount of parking spaces in the United States,'" said researcher and lead author of the study Mikhail Chester.

Chester pointed out that if there are 250 million cars in the country, obviously there must be at least that many spaces for people to park at home -- add in spaces for work and shopping and it becomes apparent that there must be many times more than 100 million parking spaces. The researchers' estimates included things like street side parking, building code requirements, parking garages, lots in megastores like Walmart and Target and then parking spots at work and home.

Even defining a parking space is a difficult task, so the group focused on several primary groups of paved spaces; free and metered on-street spaces; surface parking, or ground spaces like those found in front of big box stores and in people's driveways; and multi-story parking structures.

Because of all the uncertainties, they decided to examine the environmental impact of five different scenarios for parking. The first scenario was limited to only the 100 million metered parking spaces in the previous study. The next three scenarios examine what the group considers to be the most likely situation -- that there are somewhere around 800 million parking spaces in the United States, or nearly three official parking spaces for every car on the road.

The final case was the most extreme of the scenarios. The researchers extrapolated on a rule of thumb used by urban planners that claims eight parking spaces exist for every one car. The group says that there is little science to support this scenario, but the result would be a whopping 2 billion parking spaces. If all of those spots were consolidated into a single location they would cover an area the size of Massachusetts. The most likely scenario calls for about half that area in parking spaces.

âThe environmental effects of parking are not just from encouraging the use of the automobile over public transit or walking and biking,â the group stated in their paper, âbut also from ... activities related to building and maintaining the infrastructure.â

"There's actually a larger infrastructure for parking than for roadways," said Chester. "This speaks to the sort of hidden infrastructure components that are there to store our vehicles when they're not moving."

Once the parking estimates were completed, the researchers calculated the energy requirements as well as the emissions from creating asphalt and other things associated with constructing and maintaining those parking spaces. They then added their estimates to the emissions caused by an average vehicle.

Their results are considerable, even when compared to the environmental effects of driving a car. The group found that parking contributes to greenhouse gases like carbon dioxide, methane and nitrous oxide. In fact, the environmental cost of so many parking spaces can also raise the amount of carbon dioxide emitted per mile by as much as 10 percent for an average car. And, when calculated over the lifetime of a vehicle, the amount of other gases like sulfur dioxide can rise by as much as 25 percent and the amount of soot as much as 90 percent.

Sulfur dioxide and soot are both harmful to humans and are associated with things like acid rain and respiratory illnesses.

"We've traditionally thought about the environmental impact of parking as being limited to the heat island effect," said Chester, referring to the process by which large areas of asphalt are thought to heat cities to higher temperatures than surrounding rural areas. "The amount of parking has a rather drastic impact on the energy and emission contributions from vehicles."

Shoup said that the informal calculations he's done produced parking space estimates similar to the Berkeley teams, but adds that he thinks the impact of driving cars still dwarfs the environmental cost of parking.

"Only in the last 5-10 years have we been giving some thought to whether there should be an abundance of free parking," said Chester. "Ninety-nine percent of automobile trips end in free parking and this has a major effect on people's choice of what means of transportation to take."