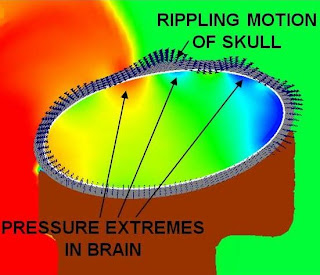 When today's soldiers enter combat, they're better protected from explosions than the military personnel of any previous war. Ultra-strong helmets shield them from the flying shrapnel of homemade bombs; high-tech cushioning cradles their skulls during sudden impacts with the ground. But because modern soldiers are surviving explosions that would have taken the lives of Vietnam-era infantrymen, army hospitals are seeing a rise in a particularly painful war woundâtraumatic brain injury (TBI).

TBI can range from a simple concussion to damage with long-term effects, including impaired cognitive abilities and even anxiety and depression. New research is helping to explain how those injuries come about, potentially pointing the way to helmet designs to reduce brain damage. Using code originally designed to simulate how a detonated weapon rattles a building or tank, physicists at Lawrence Livermore National Laboratory in California and the University of Rochester in New York modeled an all-too-real situation: a 5-pound bomb exploding 15 feet from a soldier's head. Their goal was to understand the effects of the high-speed shock wave that follows an explosion.

Some doctors have suggested that the wave reaches the brain through the eyes or ears; others say it causes compression of the chest and a subsequent surge of blood to the brain. The new research, soon to appear in the journal Physical Review Letters, shows that the shock wave doesn't accelerate the head enough to damage the brain. Instead, it seems to affect the skull directly.

"Your skull is not exactly rigid, so the pressure actually deforms the skull as the blast wave moves across," said Eric Blackman, who is one of the authors of the study. "That flexure drives a stress wave that propagates into the brain. It's something like an inverse earthquake."


The waves flex the skull by only about the width of a human hair. But according to coauthor William Moss, "that's enough to generate pressures in the brain comparable to [an] impact." The reason is that the brain contains a lot of water. "Push on it a little bit and you get a lot of pressure," said coauthor Michael King. Because the blast wave sweeps across the skull in just a fraction of a second, "you don't have time for the pressure to dissipate, so you get a localized region of very high pressure."

David Moore, a vascular neurologist and the deputy director of research at the Defense and Veterans Brain Injury Center, headquartered in Washington, D.C., said that the skull flexure mechanism proposed by the physicists is just one hypothesis among several competing concepts of blast waves and injury. "Like all these hypotheses thereâs yet work to be done in terms of validation," he said. "There are too many unknown variables from the constitutive properties of brain and skull at high strain rates along with other associated blast phenomena."

The team considered the performance of Kevlar helmets with two kinds of cushioning systems: a nylon web system that was retired in 2003, and the foam pads of the Advanced Combat Helmet, which is standard-issue for today's soldiers. The results were unsettling.

To protect soldiers from bullets and shrapnel, modern helmet design maintains a 1.3-cm gap between helmet and head; in the simulation, the blast wave washed into the helmet through this gap. "The helmet acts as a windscoop, so the pressure between the skull and helmet is larger than the blast wave by itself," King said. While the ACH's pads mostly prevented this underwash, they also passed on forces to the skull.

King suggested that the pads' stiffness could be optimized to "take the best of both worlds; it doesn't allow the blast in there, and it doesn't transfer [forces] from the helmet to the head." He stressed that when making changes to the helmet, preserving its ability to reduce impacts and fend off bullets was paramount. "You'd have to be careful to make sure it doesn't interfere with what the helmet does very well, which is stopping fragments and bullets," he said. "The whole idea why there was a big gap between skull and helmet in the first place, is it makes it more likely for the soldier to survive if a bullet hits the helmet."


The researchers stopped short of claiming the high-pressure regions caused by blast waves would then cause TBI. But their findings seem to clear some of the fog surrounding closed head injuries, said Brent Masel, a neurologist and the president and medical director of the Transitional Learning Center, a post acute brain injury treatment program in Galveston, TX.


"We classify brain injuries as mild, moderate, or severe based on the amount of trauma they have at that timeâ¦ but the severity of injury and eventual outcome may very often be different," Masel said." Assuming their model is correct, this answers one of the questions that keeps getting raised-how do these men and women who have a minor blast injury have symptoms? It may be that the blast injury isn't so minor."

According to an article in the New England Journal of Medicine, between January 2003 and February 2005 Walter Reed Army Medical Center treated more than 450 patients with traumatic brain injury. The majority of these were closed brain injuries, meaning no shrapnel had penetrated the skull. As stated in the above story, and illustrated in the NEJM article, moderate and severe TBI, which formed 59 percent of these injuries at Walter Reed, have extremely long-lasting effects. That could mean headaches and sensitivity to light; it could also mean changes we usually associate with personality, like mood changes or impulsiveness. There are also the cognitive changes, said Dr. Wayne Gordon, director of the Mount Sinai School of Medicine's Department of Rehabilitation Medicine, such as "memory, information processing speed, attention, executive functions."

"Language can be impaired, but not in the same way as a stroke patient," he said. "[Patients can have] difficulty with retrieving words... or in what we call pragmatics, understanding social communication."

Because the effects TBI are so long-lasting and complex, the cost to the government is enormous. A 2005 paper by Scott Wallsten of Stanford University and the Technology Policy Institute and Katrina Kosec of the World Bank's Development Research Group estimates that the cost of treating a soldier with serious TBI is between $600,000 and $5,000,000 over his or her lifetime.

Intriguingly, there is concrete evidence that the damage caused by a blast wave differs significantly from the damage caused by an impact. Moore recently completed a study that used diffusion tensor imaging to compare the brains of injured soldiers exposed to a blast to those of soldiers who had brain injuries due only to impacts, and also to those of healthy soldiers.

It turns out there is a differenceâa parameter called the apparent diffusion coefficient was smaller for the blast victims. "That suggests to us that in these service members, there might be an aspect of what we'd term an chronic inflammatory response, tissue that's still injured [after] quite a number of days, 70 to 75 days, nearly three months," Moore said.

Research appears in the current issue of Physical Review Letters

What a great idea! Since the the earthquake invisibility cloak is based on clever geometry rather than expensive or exotic materials, it might be feasible to use the same concepts in a helmet. Of course, it would still need to protect against bullets, shrapnel, and impacts.

One of the weak points of this research, at least in the opinions of the doctors I talked to was, that the model was so simplistic. I'd argue that the simple model allowed the team to see a potentially realistic mechanism for brain damage that doctors hadn't guessed at. But wouldn't it be wonderful if they could refine that model of the brain? Then perhaps we could see, according to the physics of the situation, where the brain should be damaged, even if it is diffuse. Surely that would mean doctors could then devise more effective treatments, tailored to where the patient has those "scratches."

As a follower of this blog, I wonder if some of the thinking that would make buildings invisible to earthquakes might help make the brain invisible to blast waves?

As a physician interested in Neurobehavior, I wonder if the Diffusion Tensor Imaging technology is being used clinically yet, so I'll be off to follow those links.

When the brain jiggles hard, instead of cortical injuries which result in focal neurological deficit, and correspond to the lesion on the MRI, damage to the white matter is diffuse and messages are rerouted around, so there is a degradation of brain function, the usual analogy is to holograms, and scratching areas of a CD or DVD. These patients have patchy disabilities, and tend to look "flaky." Anything that could demonstrate that the flakiness is real would help them get access to help, and might help clinicians characterize behavioral syndromes corresponding to patterns of damage.