The Surprising Physics of Pipe Organs

One of Schuke's pipe organs graces a cathedral in Kaliningrad, Russia.

WASHINGTON (ISNS) â Pipe organs may be more than 2,000 years old, but they continue to perplex scientists with their mysterious behavior. In a paper soon to appear in Physical Review Letters, physicists have coaxed the antique instrument to reveal one of its secrets, and the discovery could lead to a new way to silence loud, persistent noises, such as the roar of an airplane or the whine of factory machinery.

In 1877, English physicist Lord Rayleigh observed that when two almost identical organ pipes are played side by side, something strange happens. Rather than each blaring their own tone, the two pipes will barely make a whisper. But put a barrier between them, and they sing loud and clear.

Markus Abel and his team of physicists at Potsdam University in Germany found themselves uniquely poised to investigate the long-standing mystery. As an expert in nonlinear science and fluid dynamics working under a grant from Schuke, a Potsdam-based organ manufacturer, Abel was studying turbulence and resonance in the huge air channels that supply an organ with its voice.

Schuke had supplied the team with small organ pipes for their research. Abel recalled Lord Rayleigh's observation and wanted to test it himself.

He set up an experiment with two pipes side by side and discovered that Rayleigh was right. "We found out it's exactly what he said," Abel said.

Abel saw that the two pipes influence each other as they are played, via the air between them. Even if initially tuned to slightly different frequencies, the two pipes change subtly until they sing exactly the same note, but vibrate the air exactly the opposite of each other. The two out-of-synch sound waves cancel almost perfectly, resulting in near silence.

"They adjust to each other in a way that the energy consumption is minimized," Abel explained. If the pipes are built to sound notes that are too far apart from each other, they'll sound independently. "If the difference is too strong, it would take too much energy. You have a certain reservoir of energy that must be enough to synchronize these two pipes."

Bryan Timm, an organ builder and custom sales expert for Organ Supply Industries Inc., in Erie, Pa., said that organ builders take the phenomenon into account when laying out organ pipes. An organist can produce a subtle vibrato by playing two notes at the same time. The signals interfere to create an undulating sound, known in physics as a beat. But if the two pipes are constructed in the same way and placed next to each other, "they draw on one another, and they're not effective," Timm said. "The easiest thing to do is to place them further apart. This is why, in organ building 101â¦ you have to have them separated." 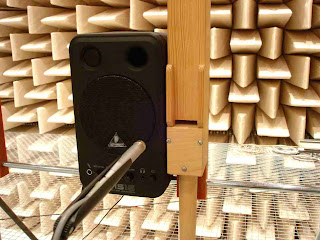 Abel's initial research left him wanting to know more. In a recent experiment, he replaced one of the pipes with an electric speaker. This time, he found that, within a frequency range, an almost inaudible signal from a loudspeaker caused the pipe to match its frequency to the loudspeaker's, even though the pipe's signal was a thousand times louder.

Abel mined the data for a detailed mathematical description of an organ pipe's distinctive sound, which he then used to produce realistic pipe tones with a computer. With some work, he said, his faux organ could rival current synthesizers. But the experiment also prompted him to consider the possibilities of silence.

"Imagine something like wind whistling through a house, where you have a frequency that gets extremely on your nerves," Abel said. "Then you put at the right point a pipe, and the pipe emits the [opposite] of the same frequency. If you go down windâ¦the signals would cancel, silencing the noise."

He said that synchronized canceling could work for noises that peak at a certain frequency; for instance, pipes fitted into an airplane's wings could silence the deafening roar of its engine during take-off or landing. More practically, engineers could arrange large machines in a factory so that their vibrations cancel out, sparing the building and workers from persistent rattling.

Lord Rayleigh wrote about the noise-cancelling organ pipes in his 1877 book, the Theory of Sound:

A permanent interference of two notes may be obtained by mounting two stopped organ pipes of similar construction and identical pitch side by side on the same wind chest The vibrations of the two pipes adjust themselves to complete opposition so that at a little distance nothing can be heard except the hissing of the wind. If by a rigid wall between the two pipes one sound could be cut off the other would be instantly restored.

Abel told me that, before he set up his own experiment, he really doubted whether Lord Rayleigh's observation was true. If you're also feeling doubtful, Abel recommends a simple experiment you can do at home.

Place two (analogue) metronomes on a plank of wood, set them to the same beat, and start them at different times so they tick out of synch. Then set the plank of wood on two empty beer or soda cans.

"Wait a while, and you'll see that they tick at exactly the same time and exactly the same direction," Abel said. He added that his department often does the demonstration for schoolchildren, whom it never fails to amaze. In the YouTube video below, a physicist at Lancaster University in the UK does it with five metronomes (although no physics degree is required, I'm assured, to make this work). It might surprise you how well it works.

Abel speculates that the phenomenon might explain an old story about clock makers. In the 17th century, clock makers would hang a big, expensive, accurate clock on the wall surrounded by smaller, cheaper clocks. While the smaller clocks hung near the big one, they'd tell the time perfectly. "But buy a small clock and after a week it's completely desynchronized," Abel said. He isn't sure if the story's entirely true, "but it seems to me at least plausible," he said.

If neighboring pipe organs playing the same note can cancel out, I wondered if anything strange happens when two flute players in an orchestra play the same note. Turns out Abel, who plays the saxophone, got a very strong response from physicists who were also musicians when he presented the research at an Acoustical Society of America meeting last year.

"Immediately people came to me after the talk," Abel said. Horn players claimed they'd felt synchronization while tuning up before a concert. "They said, 'I know what you mean, I feel this, sometimes I feel as if I'm not blowing. It sounds perfect, but I feel that something else has taken over control." Abel thinks it's probably the same effect that's occurring in his two pipes. "With horn players it works particularly well because theyâre so incredibly loud, they must influence each other."

The crux of Abel's work with the loudspeaker, as the article states, was to create a detailed mathematical description of how pipes vibrate. If you want to check out his reconstructed organ sounds and judge their convincingness for yourself, go to his group's research page.
Posted by Unknown

once resonance... and the natural asymitotes slanting through a vestibular space, [say a sports arean],[or a cathedral], are mapped and fed into a computer... aren't such transductive spaces and the cojoined maps usually used to admit the "instrument's" emitted notes/tones into receptive audiences ears? Noise elimination efforts are a danger, in a way, because of the delicate balance of the site being suddenly disrupted by an unexpected incidental sound unleashing choas within the affected zone!

I fear the analogy with particles is not really perfect, because quantum
mechanics is a linear theory and synchronization occurs only for a
nonlinear oscillating, self-sustained, system.

Assume for a moment equal frequencies of the pipes/metronomes.

There are basically three ingredients in a synchronizing system:
energy supply
- organ pipes: a constantly blowing wind
- metronomes : a constantly acting torque (of a mechanical spring)

energy losses (dissipation+radiation):
- organ pipes: internal damping of the oscillating
air column in the resonator
energy dissipated by the wind field (this is NO acoustics)
energy radiated by the air sheet as sound waves

- metronomes : mechanical damping
radiation + damping through the support
(the wooden bar in the video)

Now think about the coupling:
Let pipes O1 and O2 stand side-by-side.
Radiated waves are spherical (wavelength/pipe dimension ca. 10).
I.e. the pressure field emitted by O1
hits O2 (air sheet of O2) with no phase difference.
I.e. if O1 moves outward, O2 moves inward.
The same holds for O2.
If both sound in phase they work against each other,
if they sound in antiphase, they work together,
much less energy is lost by the complete system OF BOTH PIPES.

What if they stand some distance apart, say half a wavelength?
Then the wave emitted by a O1 -say outward directed-
hits O2. Now we have to think about time delay:
Emission O1 at time t1, outward, hits
O2 at time t2 = t1+T/2 (half a wavelength corresponds
to half a period)

What are the respective states of O2 and O1 at the time t2?
Consider only O1 as wave source (O2 behaves analogously)
O1: inwards (it was outwards at t1)
O2: inwards (because it was emitted outwards by O1)

I.e. these two sound in phase.

Indeed, we have performed a series of experiments which show exactly that
effect with two pipes and varying distance. But for a
spherical sound wave the amplitude in 3D decreases as 1/Radius and
so does the coupling STRENGTH. This in turn reduces synchronizability.

For the metronomes the consideration is completely analogue,
but much more complex, because the waves emitted by the
metronome are much more involved. the series of tics are periodic, but
with each tic a whole bunch of broadly distributed frequencies
is emitted as a wave packet. Now, the wave packet emitted by M1
arrives after some time at M2. Because of the directional travelling
of the wave packet, there is a momentum transfer in the direction of
the wave packets direction. Depending on the way through the metronome
body the oscillator is hit in or out of phase.

I made this experiment with 2,3 and 5 metronomes and most often the
oscillators are in phase. Specially with 3 metronomes you can find
as well 2 metronomes swinging left and one to the right (antiphase).
It really depends on the details of the oscillators and the coupling.

And now the fun starts: what happens if there are slight
frequency differences? If you are interested, let me know!

We provide some details on the organ pipes at
http://www.stat.physik.uni-potsdam.de/~organ
The presentation might clarify the sound production...

Yeah, Peter, I was wondering about that too. You'd expect the metronomes to synchronize out of of phase if they're a good analogy for the pipes.

Thanks for bringing it up. Maybe Scappicino can check with the authors about it