Swimming through sand: The secret of sandfish locomotion 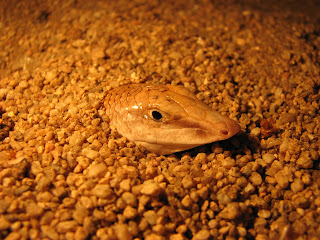 We know how airplanes glide in the air and how submarines move through water, but we don't know much about how creatures "swim" through sand. 'Til now...

A couple of Ph.D. students and their professor have been taking a closer look at what happens when sand-dwelling creatures - like lizards, crabs, snakes and worms - dive below the surface.

Yang Ding and Nick Gravish, along with Daniel I. Goldman, their Georgia Tech professor of physics, have been studying the sandfish lizard, a popular sand-dwelling pet, to see how it maneuvers in its subterranean environment. 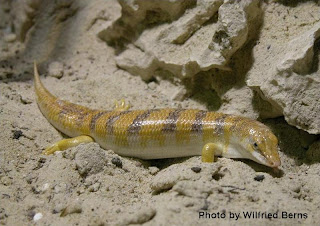 as a little lizard that lives in the desert in North Africa. When startled, it can burrow 10 cm beneath the surface in less than half a second. Its wedge-shaped head, which biologists believe gives the critter its lightning-quick burrowing ability, was the project's inspiration.

"We think the sandfish is the champion of rapid burial," Goldman said.

Another thing the trio noticed about the lizard, Ding said, is that its belly is really flat. "We thought that might have an effect," he said.

To test the theory on both the head shape and the belly, the team dragged three objects of different shapes through a container filled with tiny glass beads that acted as a sand analogue. They watched to see whether each object generated any lift - the force perpendicular to the direction of motion that "pushes" an object up.

The first was a cylinder. The team dragged it horizontally through the beads (if it were a Coke can, it would have been dragged from the dash in between the words "Coca" and "Cola") and measured the forces acting on it.

[Computer simulation of a cylinder being dragged through glass beads
showing the beads' movement]
The cylinder experienced positive lift; it tended to rise within the beads, headed for the surface. A square rod was also dragged through the beads and it, too, rose towards the surface, but just barely. The third object was a half-cylinder. It experienced negative lift, sinking lower into the beads as it was dragged along.

[Computer simulation of a cylinder being dragged through glass beads
showing the beads' speed: The brighter colored beads have a higher speed.
The cylinder rises because it experiences lift.]
Of the three objects, the half-cylinder most approximates the shape of the sandfish lizard's head. Since the lizard also experiences negative lift when it enters the sand, the lab test showed that the half-cylinder was a good starting point for modeling the lizard's head.

[Video of a cylinder's trajectory over time when dragged back and forth
through plastic BBs. The cylinder is attached to a thin rod that slides
up and down freely. The rod has an LED at the top to show vertical movement
over time. In this experiment, the LED shows that the cylinder experiences lift
and rises over time.]
The researchers then dragged flat plates through the sand. The plates were given roughly the same angle of attack - or angle away from horizontal - as the leading edge of each of the objects. To mimic the cylinder, the first plate was at a very small angle almost perpendicular to the floor. Just as for the cylinder, the plate experienced positive lift.

The plate was then dragged forward at a 90 degree angle relative to the floor, and again, as with the cube-shaped rod, there was next to no lift. Then the plate was dragged at a wide angle, leaning back from the direction of motion like a lawn chair leans back from the surf at the beach. This time, as with the half-cylinder, there was negative lift.

These were exciting results for the researchers because they realized that they could break up the shape of any object into flat plates and sum them up in a computer model to see the forces acting on any object. In addition to showing lift, the models also helped them to understand how much drag, or force acting opposite the direction of motion, "tugging" on an object, was being produced.

"We found that we can basically understand the forces by decomposing them in flat plates," Gravish said. "You can build whatever object you want to see what forces it undergoes in granular materials."

A database of how objects respond when traveling through granular materials can be created simply by finding the sum of simple materials - the plates. Since there are no equations to describe locomotion in granular materials, the find was particularly exciting.

"What you really want to do in all this business is figure out the principles of what's going on," Goldman said. The results of this research have opened the door for the physicists to do just that.

On an earlier research project, Goldman's CRAB Lab used high-speed x-ray imaging to observe the lizard's movement when submerged. They found that it doesn't use its legs when swimming through sand, instead tucking them by its side and slithering like a snake.

[Earlier research showed that when "swimming" through sand, the sandfish lizard tucks its legs by its sides and slithers like a snake.]
Using the data garnered from watching lizards swim and the new lift and drag research, the CRAB Lab got down to serious business and built a sandfish lizard robot they hope to debut at the 2011 International Conference on Robotics and Automation. They envision creating a rubble-swimmer that could aid with search-and-rescue missions after disasters like the earthquake in Haiti or the 9/11 collapse of the Twin Towers.

Ding, Gravish and Goldman's paper, "Drag induced lift in granular media," is due to appear in Physical Review Letters Dec. 31.
Posted by Unknown