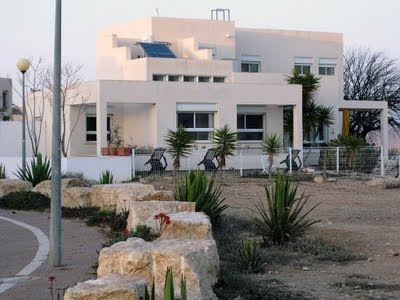 Walk through a city and the weather may change from block to block, often in startling ways.

Step into a canyon of tall buildings and sunlight disappears. Winds arise seemingly from nowhere. The air smells completely different on a balcony and in the street.

City buildings create their own microclimates. Ignoring these variations can make life uncomfortable for inhabitants and prevent buildings from achieving true energy efficiency, according to Evyatar Erell, a professor of architecture at Israel's Ben-Gurion University of the Negev.

"Even when architects design a green building, it may not make the best use of the environment because other buildings get in the way," he said.

Erell is the lead author of a new book, "Urban Microclimate: Designing the Spaces Between Buildings", that shows how to apply climatology to create greener, more livable cities.

"What we're seeing with this book is an appreciation of architectural scales beyond a building's individual plot. This is very topical, because when you talk about mitigating greenhouse emissions, buildings are a big slice of the pie," noted James Voogt, a professor of geography at University of Western Ontario, in London, Canada.

Erell began working with microclimates in 1986, when he joined Ben-Gurion's Sede Boqer campus in the middle of the Negev Desert. He was part of the team that built Neve Zin, the first Israeli settlement designed from scratch to manage the community's own microclimate.

The architects and planners laid out Neve Zin to handle summer daytime temperatures above 100 degrees F, much cooler nights, and winter frosts. Residents built homes with large southern windows. These let in the low winter sun and passively heat the house. During summers, residents close the window's external blinds to block the sun and prevent overheating.

The solar approach worked because planners positioned buildings so that no home could throw a shadow on its neighbors' southern windows. Winding streets slowed cars and prevented desert dust from blasting down their length. High, vine-covered concrete walls defined paths and protected pedestrians from the summer sun.

Those pathways have their urban counterparts, the deep canyons formed by tall buildings. Skyscrapers not only block direct sunlight for all but a few hours per day but also create vortices, the corkscrew circulation of air in a fixed area.

"Sometimes you'll see a vortex with dried leaves spinning around and around and not going anywhere. This trapped wind affects just about every aspect of micrometeorology, from air temperature and humidity to air quality," said Erell.

Vortices can also trap pollutants at street level, preventing them from escaping upwards into the atmosphere. This worsens air quality for pedestrians.

The ratio of building height to street width is a good indicator of airflow patterns, Erell explained. Lofty buildings and narrow streets usually reduce air speed and generate vortices. In cold climates, this keeps warmer air recirculating at street level. Yet those same tall buildings can redirect winds at rooftop level down their sides and into the street, creating cold, powerful blasts.

Where buildings are not as tall or streets are wider, air circulates more freely. This allows pleasant breezes to circulate and whisk away pollutants.

While no urban planner is likely to recommend knocking down a street of skyscrapers to improve street comfort, they can use microclimate principles to revitalize neighborhoods.

An example is Singapore's Clarke Quay, a former warehouse district. "The government decided to renovate the shops and restaurants, and improve the microclimate instead of building an enclosed shopping mall," Erell said.

The site is tropical, hot and humid under a blazing sun with torrential downpours during the rainy season. The designers added trees and large steel frames with umbrella-like canopies that stretched across the street above the warehouses. These protect shoppers from sun and rain. A mechanical ventilation system creates a gentle breeze.

British architectural engineering firm Arup finalized the design by using mathematical models that predicted how each item would affect the quay's microclimate. This enabled the company to properly size and space both the canopies and air blowers.

"I've walked there during the day, and it is reasonably comfortable â certainly more so than other places nearby â even without air conditioning," Erell said.

Erell believes that models are the future of microclimate planning. They would enable planners to judge how different elements would affect complex projects.

In fact, Erell has designed his own model to predict street temperatures. Yet he is the first to say that it takes more than guidelines and computer models to create a livable environment.

"It's not like having a recipe, where you follow all the steps and get a good cake. We start with principles and tools, but you can put them together in many different ways," he said.