Shooting water from the poles is part of birth process for new star. 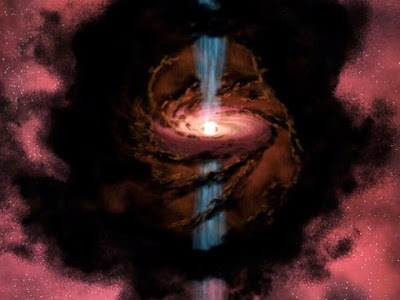 Astronomers have found a nascent star 750 light years from earth that shoots colossal jets of water -- a cosmic fire hose -- out its poles in bullet-like pulses.

The blast creates huge shockwaves around the star and the process may be responsible for sprinkling the universe with water.

And it could go on for a thousand years in each star. Astronomers think all baby stars go through this process as they form, and that our sun did it too once.

The protostar was found in the Perseus constellation in an object called L1448-MM, seen from the earth to the right of the Pleiades, also called the Seven Sisters cluster of stars, in the constellation of Taurus. It is called a low-mass protostar, meaning it is just beginning to grow into a star.

While jets like that have been seen in other baby stars, astronomers, using the European Space Agencyâ's Herschel infrared orbiting telescope were able to measure the flow of the jets using water molecules as the tracer.

Lars E. Kristensen, a postdoctoral student at the Leiden University in the Netherlands, an author of the paper, said that all stars are formed by the accretion of dust and other particles in interstellar space and are eventually surrounded by a disk of material that falls into the star as it builds.

The disks are something like the rings of Saturn but far less well-defined, he said, "more puffy."

Material that is not used by the forming star is blasted back out into space from the poles, perpendicular to the angle of the disks.

"We donâ't know the launching point or the exact launching mechanism," Kristensen said. "There is no self-consistent theory that can explain what we are seeing."

The stream of gasses is about 180,000 degrees Fahrenheit, so the water is not liquid, but rather atoms of hydrogen and oxygen atoms, the building block of water. When it gets into space and the molecules interact with the dust surrounding the star, however, and the atoms probably combine to form water ice.

Kristensen and the European astronomers described the jets of being made up of "bullets" of water but that is a bit misleading. The water actually pulses, like a fire hose with an unsteady water supply.

Kristensen says the pulses fly out at 50 kilometers a second, or about 120,000 mph. As a pulse starts to slow, it is rammed from behind by pulses moving faster behind it, producing something like a bow shock wave. Those collisions are what the telescope sees and what he described as bullets.

Each pulse could last a year, which for an astronomer is shorter than a blink.
The bullets are going so fast they eventually fly beyond the accretion disk and the gas cloud around the protostar. The shock waves eventually dissipate.

Besides the hydrogen and oxygen atoms, the jet streams are known to include carbon dioxide and silicon oxide molecules. The Herschel is capable of spotting the light signatures of the atoms through the gas cloud that surrounds L1448-MM.

No one knows how long this process lasts. Eventually, the star reaches maturity and has acquired all the material it needs and the whole process of making a star shuts down, which could be anywhere from one to ten million years.

"We've known about these jets before," said astronomer Mark Krumholz of the University of California at Santa Cruz, who was not part of the research team, but the measurement "is far more precise." Krumholz agrees that all stars go through this birth process and said that the use of water as a tracer gives astronomers a handy tool to measure these jets.