Dark matter detection experiment CoGeNT has seen a possible signal of dark matter, similar to the much-disputed DAMA/LIBRA collaboration result, it's spokeperson announced yesterday at the American Physical Society April meeting in Anaheim, California. Whether or not it is really a sign of dark matter is still very much open to debate but it presents an intriguing possibility that is leading to heated discussion in the dark matter community. 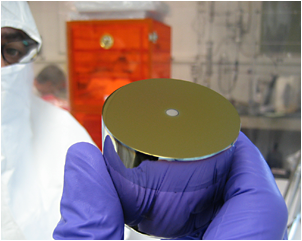 The germanium detector at the heart of the CoGeNT dark matterÂ
detector. Photo courtesy of the CoGeNT experiment.
CoGeNT spokesperson Juan Collar presented data that showed an excess of low energy interactions in their germanium crystal detector that couldn't be explained by any known cause. Something seems to be hitting the germanium atoms and making them recoil. That something is a mystery, but possibly dark matter. The hits are coming at a rate of about 3 per day which is higher than expected based on other dark matter searches but is still consistent with the DAMA/LIBRA experiment. That experiment has been conducting its search for nearly a decade and claims to have seen a real signal of dark matter.

The DAMA/LIBRA experiment is controversial because it infers the presence of dark matter by looking for a difference in the number of interactions in their sodium iodide crystals between summer and winter when the Earth is moving against or with the supposed cosmic flow of dark matter. But searches by other experiments for dark matter particles of that mass and interaction strength turn up empty. Many physicists believe that there is some unidentified factor that changes seasonally but is not dark matter. Yet, nobody can identify that factor. Making the issue even more difficult is that others can't attempt to replicate the DAMA/LIBRA experiment as they have not made their sodium iodide crystals available to others.

Now that a second experiment has seen an identical seasonal variation in an independent configuration, the mystery has only deepened. Collar is not saying whether he thinks his experiment has observed dark matter but comments, "We're making all the data available to others so they can make their own interpretation."

Physicists from the XENON100 experiment in particular don't seem impressed by the result as they believe their search covers the same territory but turns up nothing at all. Collar contended in his presentation that the XENON100 search doesn't cover quite as much territory as they think it does and that there is still a gap where dark matter could be living.

University of Chicago theorist Dan Hooper finds the result "very exciting" but admits that he is biased in it favor as a recent theoretical development of his predicts the existence of a particle that has properties consistent with the CoGeNT result.

CoGeNT was recently shut down as result of a fire in the Soudan, Minnesota, mine where it is located. Collar doesn't know if it will be operational when they try to restart it in the next few weeks but crosses his fingers as he hopes that he still has an experiment to run. CoGeNT will try to make a more definitive statement about their signal once they have more data but it seems that the dark matter mystery will be the subject of debate for some years yet.
Posted by Unknown