Is a Nobel laureate smarter than a fifth grader? 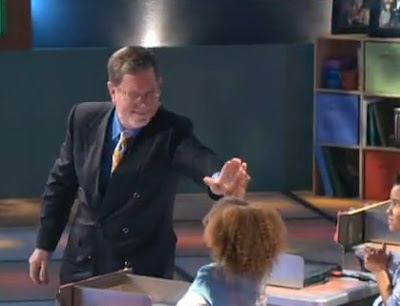 George Smoot on last Friday's "Are You Smarter than a 5th Grader?"

Is a Nobel laureate smarter than a fifth grader?

George Smoot, a UC Berkeley professor who won the 2006 Nobel prize in physics, stepped up to the challenge last Friday as a contestant on "Are You Smarter than a 5th Grader," the entertainingly humiliating game show that tests adults on facts a ten-year-old is expected to know.

The show entertains by painfully exposing just how little of their elementary school education adults retain, so having a Nobel laureate on stage called for even more ridiculous FOX theatrics than usual. In the opening sequence, the announcer booms, "Will he blow it, and be the laughing-stock of Nobel prize-winners everywhere?" I wonder if any of Smoot's Berkeley colleagues started to sweat at that point. Would the show expose the shortcomings of science? Would Smoot remember how to spell the word "Mississippi?"

[Warning: spoilers below. If you'd rather find out for yourself how Smoot faired, watch the episode here on Hulu.]

Unfortunately for host Jeff Foxworthy's humor routine, which is usually based on insulting his guests, Smoot sailed through questions on the angles of an equilateral triangle and whether the conga was a percussion instrument. The show's writers tried to inject some tension with a fifth-grade astronomy query: "What country was the first to put a human being in space?" Smoot quickly remembered the Soviet cosmonaut Yuri Gagarin, but Foxworthy stumped him on the yearâ1961. That proved to be the Foxworthy's only opportunity to poke fun at the Nobel laureate.

Part of game play is cribbing answers from the show's stable of adorable, TV-ready ten-year-olds. So the fifth graders began to look decidedly pouty as Smoot answered question after question unaided. Finally, apparently realizing that he was taking all the fun out of the show, Smoot decided to "cheat" by blindly "copying" the on-stage ten-year-old's answer to the $500,000 question. This is by far the riskiest move a contestant can make, and Smoot clearly knew the answer to the question. Luckily, he wasn't punished for his good sportsmanship; ten-year-old Francesca answered the question correctly, and Smoot went on to be the show's second-ever million-dollar winner by correctly answering the question "What US state is home to Acadia National Park"âit's Maine. 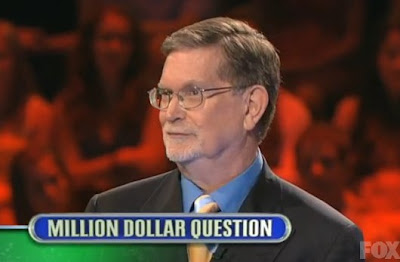 Smoot flirted with the small screen earlier this year with a cameo on nerdtastic sitcom "The Big Bang Theory." Not only was it nice to see someone actually win "5th Grader" for a changeâother episodes end on a rather more embarrassing noteâbut it was wonderful for an important modern physicist to enter the American consciousness and crack a few redneck jokes about himself while he was at it. The audience oohed and aahed when he pulled out his Nobel medal, and Smoot even got to say a word about his research.

FOXWORTHY: "So, how does a guy go about proving the Big Bang theory?"

SMOOT: "We figured out over the years a way to make a picture of the embryo universe."

SMOOT: "So it's the very beginning of the universe, but it's got the blueprint for what's gonna happen later."

Foxworthy then cut in, joking, "You found the infant uni...I can't even find my keys half the time!" Thanks, Jeff. Still, one of the most exciting advances in cosmology made it onto primetime television, even for just a few seconds. And well done explaining it, Dr. Smoot.

What Smoot described as finding "the embryo universe" provided crucial evidence for the big bang, transformed cosmology from a theoretical to a decidedly experimental science, and earned him half the Nobel. In 1989, Smoot and colleague John Mather (he's got the other half) launched the Cosmic Microwave Background Explorer satellite, which goes by the cute name COBE, to take detailed measurements of the cosmic microwave background.

"We have a tool that actually helps us out in this study, and that's the fact that the universe is so incredibly big that it's a time machine, in a certain sense," Smoot explained in a talk he gave at a design conference last November. Because the universe is so vast and light has a 300 million meter per second speed limit, it can take equally vast amounts of time for light from other galaxies. Light is a snapshot of a place as it looked when the light left it, whether that be eight minutes ago or millions of years ago.

The cosmic microwave background, or CMB, is the oldest light in the universe, an approximately 2.7 Kelvin bath of microwaves coming to us from just 380,000 years after the Big Bang. It is a snapshot of the universe in its infancy, "when the universe was hot and dense and very different," as Smoot says, and the farthest back our time machine can take us. The picture below, from one of Smoot's slides, shows a series of nested spheres with the Milky Way in the center. The outer boundary of what we can see, that strange Jackson Pollock of rainbow speckles, is the CMB. 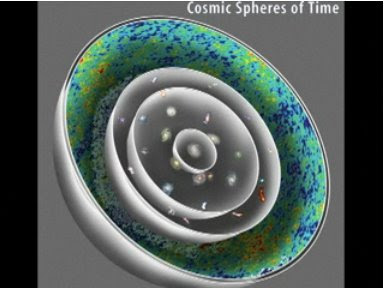 "You see the whole big picture?" Smoot asked his audience. "The beginning of time is funnyâit's on the outside, right?"

The speckles on the CMB map are really the tiniest of wrinkles, differences of one part in 100,000. The CMB was first detected in 1965 when a pair of scientists couldn't get rid of some noise in a radio receiver. It matched the Bing Bang theory; when the hot, dense universe expanded, it cooled, filling the universe with remnant heatâthe CMB. But for years after that, scientists thought the CMB was completely uniform. It turned out that the CMB was more like an abstract painting that's just one color. You have to look very closely to see the bumps and texture of the paint brush, and that's just what Smoot and Mather did with COBE.

From these tiny wrinkles, Smoot explained, "we're going to go..to these irregular galaxies and first stars to these more advanced galaxies, and eventually the solar system, and so forth." So "embryo" is precisely the right wordâthe hot dense universe folds in itself the irregularities that grew up into the grand structures of stars and galaxies as we know them today."

The wrinkles allowed Smoot and Mather to measure the intensity of the different wavelengths within the CMB. Mapping intensity versus wavelength, the researchers created a curve that matched exactly the predictions of the Big Bang theoryâanother experimental pillar supporting the theory.

Since COBE, experimental cosmology has grown into an exciting field of its own, with projects ranging from balloons at the edge of space to the the South Pole Telescope to the Planck space telescope, the successor to COBE and later CMB observer WMAP.

You can see the improved resolution from COBE to WMAP in the following picture; the images of the world are for comparison to show the kinds of details that COBE smooths out. Planck, orbiting around Lagrange point 2 has just seen first light and will map the early universe in greater detail than either COBE or WMAP. 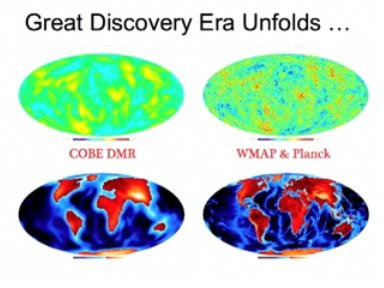 This would have been too long a story for primetime television, but I'm still happy that Smoot managed to shoehorn a sense of science and wonder into the episode. However, I'm still left wondering why George Smoot, who donated his Nobel prize money to establish fellowships, needs a million bucks.
Posted by Unknown